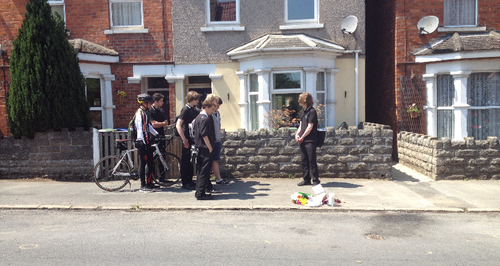 The family of an 11 year old boy who died in Purton after a collision with a road sweeper say he was a "beautiful, loving child with a fantastic sense of humour, caring and loving, with a wide circle of friends."

Daniel Climance, from Swindon, was pronounced dead at the scene of the collision in Station Road on Wednesday, 10th June 2015.

An inquest into Daniel's death has been opened and adjourned.

Daniel's family have paid tribute to him with the following statement:

"Daniel was a local Wiltshire lad who divided his time equally between his mum in North Swindon and his dad in Purton. He attended Bridlewood Primary School and was in his final year.  He was looking forward to starting Bradon Forest School in September, joining his big brother Robbie at the school.

"Daniel played football for Wootton Bassett U11 team which he loved. He had just completed his second degree black belt in Tae Kwon Do of which he was immensely proud.

"Daniel was a beautiful, loving child with a fantastic sense of humour, caring and loving, with a wide circle of friends.

"He will be sadly missed by his brothers Robbie, George and Noah and all of the extended family

The 56-year-old driver of the road sweeper, from Swindon, was not injured.

Collision Investigator Scott Hill said: "This was a very tragic incident in which a young boy sadly lost his life.  I would like to appeal to any witnesses, who have not already made contact with police, to contact us immediately. Any information may assist us in our investigation."