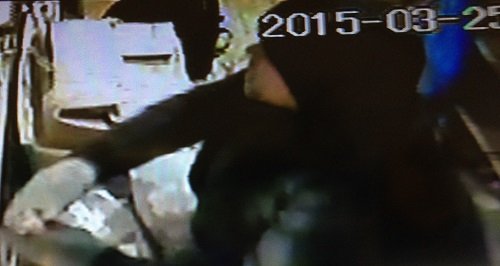 Police are appealing for information following a burglary which took place in Swindon this morning.

Between approximately 4.25am and 4.35am on 25th March 2015, two men broke into the Premier Shop in Queensfield.

Thousands of pounds worth of cigarettes, tobacco and alcohol was taken, as well as cash from the till.

The first man is described as white, wearing a black hoody with two white stripes down both arms, and white writing across the front, a white belt with black holes, black gloves and white trainers with a black and white pattern on the soles.

The second man is described as white, of slim build, wearing a black puffa style jacket with the hood up, light grey gloves, black jeans and black trainers.

Police have released a CCTV image of a man they would like to speak with in connection to this incident.

Anyone with information should contact PC Bruce Boulton on 101, or Crimestoppers on 0800 555 111 where information can be left anonymously if preferred.