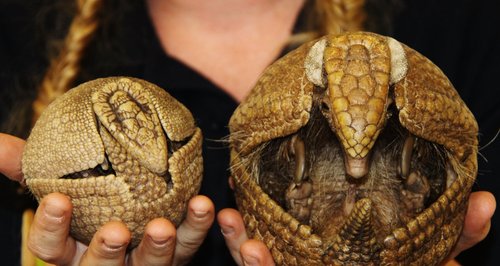 A rare southern three-banded armadillo has been born at Longleat.

Born at the end of April, Charlie (seen above with his mum), as he has been nicknamed by his keepers, is only the second armadillo to be successfully reared at the Wiltshire park.

The species has suffered a 30% decline in population in the last 10 years in its native South America and is now officially designated as Near Threatened by the International Union for Conservation of Nature (IUCN).

Keeper Emily Randall said: "Charlie is doing really well and putting on lots of weight. When he was born he was about the size of a golf ball and, although his armour was very soft, his claws weren’t! The three-banded is oneof only two species of armadillo that can roll into a defensive ball, in fact it is known as the ‘ball armadillo’ in Brazil.

"The ears can be fully tucked into the shell and the head and tail interlock to make an incredibly strong seal.

"In captivity they can expect to live for up to 20 years and Charlie’s mum Hattie and dad Knobbly, who is 14, have been living here at Longleat since 2012. We’re really proud of Hattie and Knobbly and the rest of the armadillo family we have had here at Longleat. Charlie will now be the third generation of the same family who has been born in the park.”

Charlie's diet will mainly consist of ants and termites. When it detects prey, it digs a hole and puts its nose into it, using its long, sticky tongue to lap up any insects.

The defence system of the southern three-banded armadillo is so effective it’s safe from the majority of predators. Adult pumas and jaguars are the only South American mammals powerful enough to be a natural threat. However the main dangers to the species is the destruction of its natural habitat to graze livestock.