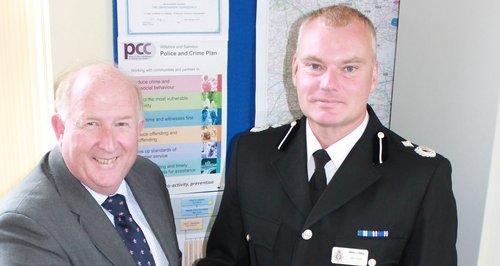 Mike Veale has been named the new Chief Constable of Wiltshire Police.

The current Deputy Chief Constable will be confirmed in the post on Monday, if he is approved by the Police and Crime Panel.

He is due to become Chief Constable on Monday 1st June, taking over from Pat Geenty who is retiring.

Mr Macpherson said: ''Because there was only one candidate for the post, our high-calibre and independent panel really put Mike Veale through his paces and he absolutely rose to the challenge.

''He was given one hour to prepare a presentation on how he would deliver my revised Police and Crime Plan against a tough financial background. He had no prior knowledge of the topic. The panel agreed that he covered the ground confidently and thoughtfully.

''The interview itself lasted two hours and he was questioned closely on every aspect of modern policing.

''I have every confidence that he will make an excellent Chief Constable for Wiltshire. He understands Wiltshire and Swindon and has been at the heart of developing strong relationships with Wiltshire Council and Swindon Borough Council and with our colleagues in Avon and Somerset Constabulary.

''He is committed to my agenda of maintaining local policing.

''In his interview, Mike Veale demonstrated a clear understanding of the principles of British policing, with integrity, fairness and public service at the core.''

Mr Veale has been the DCC at Wiltshire Police since March 2013, having joined the Force in January 2005 as a Detective Superintendent from Avon and Somerset Constabulary.

He said: ''I am absolutely thrilled at being appointed - subject to confirmation - as the Chief Constable of Wiltshire Police.

''During the past ten years I have loved every minute of serving the public of Wiltshire and Swindon and I am incredibly proud that this Force is one of the top performing forces in the country.

''The legacy that Chief Constable Pat Geenty is leaving behind is that Wiltshire Police is in the great position of being able to withstand austerity and continue to provide a good service to the public.

''The priorities for the coming months are to maintain that success and continue our transformation programme, in particular our strategic partnership with the two local authorities, and our strategic alliance with Avon and Somerset.

''If I am confirmed in the post I will be taking over a Force with a strong reputation, high standards, a clear set of values and talented officers and staff. I want to build upon all of this good work.

''Like all police forces, Wiltshire Police is facing major austerity challenges as well as an increased demand for local services. Therefore, I want to ensure that we are thinking laterally and radically about how we can save money, whilst working hard to protect frontline resources.''