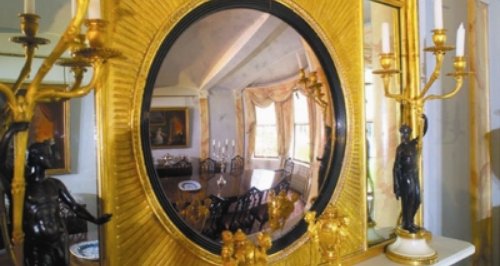 Wiltshire Fire & Rescue Service is warning people about the dangers of sunlight reflecting off mirrors and glass ornaments.

It follows a number of fires in homes as a result of the sun's rays being reflected onto fabric or other flammable material.

Last month a wooden cabinet within a property in Trowbridge was badly scorched when sunlight refracted through a glass paperweight. Although a fire crew wasn't required, an officer attended to confirm cause.

Then on 12 April, a crew from Salisbury was called to a commercial premises in Catherine Street, where carpet within a window display had been set alight by sunlight refracting through a round glass ornament.

In previous years, the Service has seen a number of serious fires started in the same way, including severe damage to a manor house in Luckington in September 2012, and a bedroom being destroyed at a house in Charlton, near Malmesbury, in March 2013.

Home safety manager Neil Chamberlain said: ''Where you have a mirror or any other glass object - such as an ornament - that is curved, this allows the glass to act as a lens. When the sunlight hits it, it becomes concentrated and, if the rays are bounced onto something flammable - such as curtains or soft furnishings - then a fire can start. The principle is the same as using a magnifying glass to start a fire. It does depend on the angle of the sun, but any mirror or glass ornament with a curve in it should never be left on a windowsill or by a window. The angle of the sun changes as the day progresses, so extra care is needed.''

He added: ''At this time of year, the sun can be very intense but also low enough for the angle of light to be an issue. We would therefore urge people to move curved glass objects away from windows, and make sure that working smoke alarms are fitted in the property, just in case.''