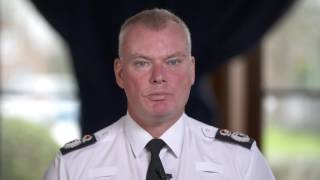 Mike Veale insists Operation Conifer is not a "fishing trip or witch-hunt".

He's written an open letter to set the record straight after speculation the team were floundering.

"Over the last few weeks particularly, there has been much speculation about this case. Whilst it is not commonplace for us to comment on a live ongoing criminal investigation (which is what Operation Conifer is) I really am very concerned and profoundly disappointed about the impact of this speculation on the public’s confidence in the police, the potential prejudicial impact upon a live criminal investigation, not to mention the confidence of persons who have come forward with information."

The full statement can be watched in the video above.

“The Chief Constable and I both take very seriously the duty to investigate fully and fairly all allegations or complaints that are received by the force.

“I also take seriously the need to preserve the good name of individuals, living or dead, if there is no evidential basis to allegations or complaints made against them. The Chief Constable and I have met to review the report of Sir Richard Henriques into the Metropolitan Police’s Operation Midland. The Chief Constable intends to ensure that any lessons emerging from that report will be taken on board by the Wiltshire investigation.

“In line with national guidance, the police are duty bound to investigate allegations that are made against deceased persons. I fully support the diligence and professionalism with which the Wiltshire force has pursued that investigation. As Commissioner, I recognise that the Chief Constable has complete operational independence in relation to the investigation of criminality. He knows he has my backing to investigate without fear or favour.

“I have been briefed regularly by the Chief Constable on the progress of this investigation. I recognise there is a level of public interest that places additional pressure on the investigation. I believe the root cause of this pressure is a legitimate concern that the reputation of a former prime minister may be tarnished without there being credible evidence of guilt. When dealing with an investigation that concerns the deceased, the usual checks and balances of the judicial process are absent.

“The Chief Constable and I are of one mind: the police cannot act as judge and jury in their own cause. Once the police has conducted the investigation to a conclusion, there must be an alternative avenue to assess the credibility of any evidence that has been gathered. I now expect there to be engagement between the Force, my office and relevant government and judicial agencies to explore how best we may secure a transparent process to assess the credibility of the evidence. It is this process that should determine whether or not the investigation report is released into the public domain.”