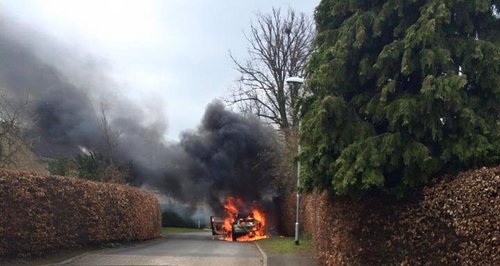 Police are appealing for information following an armed robbery at the post office in High Street, Boston Spa, Wetherby, this morning.

Officers were called at 9.30am to a report of an ongoing armed robbery at the location. Two suspects, who were dressed as women, have entered, one pushing the other in a wheelchair and made demands for money. An unknown amount of cash has been taken before the suspects have made off, leaving behind the wheelchair. A male member of staff has been injured trying to stop the pair. He has been taken to hospital with what are believed to be minor injuries.

'We are in the early stages of our investigation in to this armed robbery, which is being treated as an isolated incident.

'From our enquiries it would appear that a firearm has been discharged twice, once inside the premises and once outside. No-one was injured as a result of these discharges.

'It was initially reported that two female suspects entered the post office but it has now been established that the suspects were dressed as women and wearing wigs.

'We believe that two vehicles were used in this incident and in addition to the two suspects who entered the post office there may have also been a driver involved. One of the vehicles, a Nissan Juke, has been located burnt out in Beeches End. The other vehicle involved is believed to be a white Mercedes.

'Anyone with information about this robbery is asked to contact Leeds District CID on 101. Information can also be passed anonymously to independent charity Crimestoppers on 0800 555 111.'