CCTV Of Armed Robbery In Petrol Station In Huddersfield 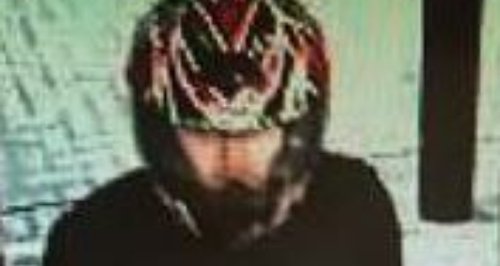 Police have released an image of a man they would like to speak to following a robbery in Cooper Bridge.

At about 5.20am today (Sunday), a man walked into a service station in Leeds Road and made demands for cash.

The man produced what was believed to be a small hand gun and the assistant handed over a small amount of cash and cigarettes.

The suspect is described as white, believed to be in his late teens or early twenties, of slim build and about 5ft 11ins tall.

He was wearing a dark jacket with a motif on the left breast, dark/black Adidas-style tracksuit bottoms and gloves.

"This man was wearing a black and red crash helmet, which had a distinctive design.

"He is believed to have travelled to and from the scene on a small red motorbike, possibly a 125cc, which was displaying an 'L' plate to the rear.

"We believe it was seen heading towards Mirfield, and would ask for anyone who recognises this man or the bike to contact Kirklees District CID on 101 or Crimestoppers anonymously on 0800 555111."