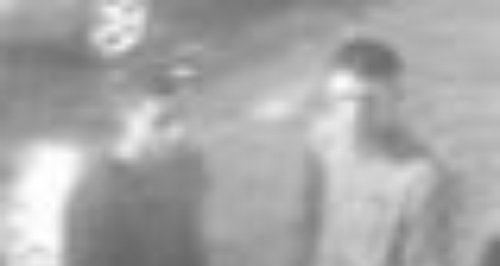 Police appealing for witnesses after a serious assault in Leeds in the early hours of Sunday morning have released CCTV stills of two men they want to speak to in connection with the incident.

The incident happened just after 3.30am on Heaton's Court (by the Club Mission nightclub) when a man was assaulted by two men.

A second incident involving the same men happened approximately four minutes later adjacent to the club when the man was assaulted. As a result of this incident he was left unconscious and with head injuries and taken to Leeds General Infirmary where the 23-year-old from Wakefield remains in a critical condition.

After the incident two males officers want to speak to in connection with the incident are thought to have walked down Heaton's Court towards Lower Briggate.

'This happened at a busy time of the night when there were lots of people around enjoying a night out. The seriousness of the incident may not have been immediately apparent at the time. I would appeal directly to anyone who witnessed this to get in contact.

'The CCTV stills we have released are quite clear and I am appealing directly to the two men pictured or anyone who recognises them to get in contact immediately. We believe they may have been in Leeds with a group of men from the West Midlands area who were inside Club Mission. The two tried to get into the club but were declined entry.

'One of the men we want to speak to has a distinctive 'undercut' hair style which is completely shaved all the way around the level of the ear and then pointed at the front.'