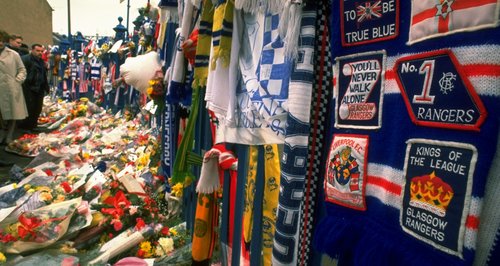 The senior police officer in charge on the day of the Hillsborough disaster will face about 200 relatives of the dead as he gives evidence in a packed courtroom at the new inquests today.

Former chief superintendent David Duckenfield, the match commander for South Yorkshire Police, will be questioned at the hearing over his handling of the fateful match, which left 96 Liverpool fans dead.

He will enter the witness box at the specially-constructed coroner's court, the room packed with families of those who died and who campaigned for two decades for new inquests to be held.

Dozens of journalists and lawyers will pack the courtroom, with proceedings also shown in an overspill annex in the building on a business park in Warrington.

Ninety-six Liverpool fans died following a crush on the Leppings Lane terrace of Sheffield's Hillsborough ground as the FA Cup semi-final against Nottingham Forest kicked off on April 15 1989.

Mr Duckenfield gave the order to open gates allowing 2,000 fans massing outside the turnstiles into the ground in the minutes before the fatal crush.

He also later wrongly told FA officials a gate had been forced open, comments repeated and publicised by the press.

Mr Duckenfield took over as Hillsborough commander three weeks before the semi-final.

The jury has heard it was his first experience of policing a sell-out 54,000 crowd at the venue and most of his policing had been in criminal investigations, rather than public order.

As fans massed at the turnstiles in the minutes before kick-off, then-superintendent Roger Marshall, who was responsible for the Liverpool fans' section, repeatedly requested that exit gates be opened to ease the pressure outside otherwise, ``somebody would be killed''.

Mr Duckenfield took ``some minutes'' to make a decision, but believing it was too late to delay kick off, gave the order at 2.52pm, saying: ``If there is likely to be a serious injury or death I've no option but to open the gates. Open the gates.''

About 2,000 fans then made their way into the ground as Gate C was opened, many heading straight for a tunnel leading directly to pens 3 and 4 behind the goal, already densely packed with fans.

A tactic of police blocking off the tunnel leading into the central pens to disperse fans along side pens on the terrace, was not followed on the day as in previous matches.

A father and son, four pairs of siblings, and a boy of 10, were among the 96 fans crushed to death in the pens.

In the immediate aftermath Mr Duckenfield told FA executives the gates had been forced open.

This was passed on to the media causing ``some seriously inaccurate reporting of events,'' but the jury have been told there is ``no question'' of Gate C ever having been forced open.

Verdicts of accidental death from the original Hillsborough inquest in March 1991 were quashed in December 2012.