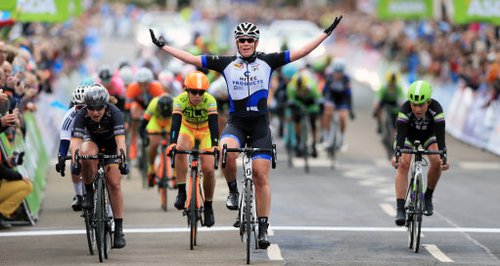 Wild (Team Hitec-Products) won in a bunch sprint ahead of Wiggle High5's Lucy Garner after the peloton had chased down world champion Armitstead and two fellow escapees inside the final three kilometres of the 136.5km route from Otley.

That fund was intended to herald a 'revolution' in women's cycling but one other key element - live coverage from start to finish - fell flat as a relay plane was grounded with a technical fault and no pictures were broadcast - to the immense dismay of organisers.

While that frustrated potential viewers at home, huge crowds once again lined the route as the sun came out following Friday's bad weather.

After the race set out from Armitstead's home town of Otley, Doris Schweizer of Cylance Pro Cycling went off on a long solo breakaway, building a lead of more than two-and-a-half minutes by the midway point of the stage.

Armitstead attacked alongside Leah Kirchmann (Liv Plantur) on the descent after Conisbrough Castle 100km in and they soon caught Schweizer, with the trio holding a lead of 45 seconds as they moved into the final 25km of the stage.

They extended that advantage to around one minute as the race briefly headed into Nottinghamshire - paying homage to Britain's first cycling world champion Tom Simpson as it passed through his adopted home town of Harworth - but as they turned back north towards Doncaster, the peloton closed in.

It all came back together in the final stages and it was Dutch rider Wild who jumped out from the pack to claim glory, and that bumper cheque.