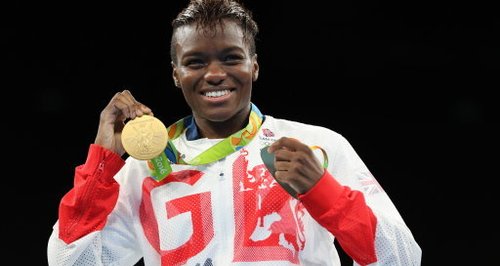 Boxer Nicola Adams showed 'pure Yorkshire grit' by defending her Olympic title and confirming her place in the history books, her proud mother has said.

Dee Adams watched the Olympic flyweight final with her son Kurtis and Nicola's Pomeranian dog Bailey back home in Leeds.

She told the Press Association:

'I still have not come down to earth. I am so happy. I must be one of the proudest mothers on the planet.'

Adams, 33, celebrated with her megawatt smile and an Ali shuffle as she was given a unanimous decision in an incredibly tight final over France's Sarah Ourahmoune.

Adams, who is dubbed the Baby-Faced Assassin, already had the Olympic, Commonwealth, European and world flyweight titles under her belt as she went into the Rio 2016. She is now Team GB's first boxer to defend an Olympic title since Harry Mallin in 1924.

Pointing out that Yorkshire has been a hotspot for producing many British Olympic winners, including brothers Alistair and Jonny Brownlee who are taking home gold and silver from the Olympic triathlon, Mrs Adams said: 'I can say I am one of the proudest mothers in Yorkshire - just look at the Brownlees they have done so well.

She said that defending the Olympic title was really important and exciting for her daughter who is now Britain's most decorated amateur boxer.

Adams first put on the boxing gloves when she was 12 years old at Burmantofts amateur club in Leeds while her mother did aerobics in the gym.

Mrs Adams said it is ' just unbelievable that she has gone from that to this, I would never have believed it'.

LCF scandal: MPs question if FCA would meet its own standards of accountability

Britney Spears conservatorship: It was clear everyone in court was stunned by what they heard