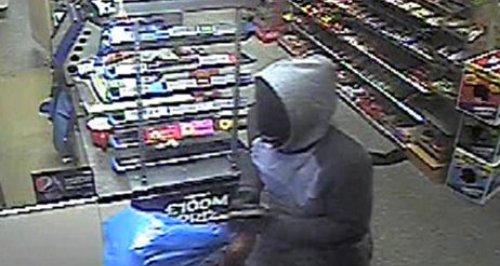 Police are investigating an armed robbery at a post office and convenience store in Leeds this morning.

At about 6.20am a man armed with a knife and a hammer went into Broom Estate Post Office, in Broom Place, Belle Isle and threatened a male member of staff who managed to escape from the store.

The robber went behind the shop counter and stole a cashbox containing cash.

He left the store and ran off along Broom Place in the direction of Middleton Road.

The man had his face covered and was described as about 5ft 10in to 6ft tall, adult but aged under 30, and of average build.

He was wearing a two-tone grey hooded top with darker sleeves, grey trousers and white and blue trainers.

"This was a very distressing incident for the member of staff involved to be confronted by a masked man brandishing a hammer at him.

"Although the man has his face covered, his clothing is distinctive and we would urgently like to hear from anyone who thinks they know who it might be."

Anyone with any information is asked to contact Detective Constable Tony Thompson at Elland Road via 101 or call the independent crime-fighting charity Crimestoppers anonymously on 0800 555 111.