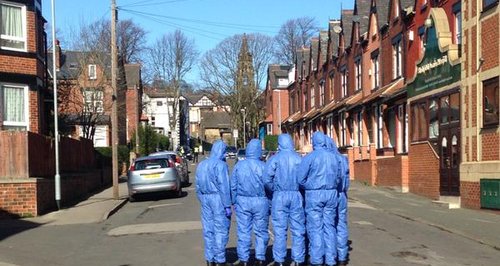 Police have launched a murder investigation after a man died following a shooting in Leeds.

Just after 9pm last night (9/3) police were contacted by the ambulance service who had been called to a man who had gone into a shop in Markham Avenue, Harehills, with gunshot injuries.

Officers attended and the 33-year-old man was taken to Leeds General Infirmary by ambulance where he died a short time later.

'Although our enquiries are at a relatively early stage, we believe this has been a targeted attack on the victim.

'There are a number of scenes in place in the area at this time and our enquiries are ongoing. A silver Vauxhall Astra was found abandoned in Pasture Road, near to the junction with Back Airlie Avenue. We believe this was the victim's vehicle and was where the shooting took place.

'Officers from the local neighbourhood policing team are mounting extra patrols in the area to reassure the local community.'

Anyone with any information is asked to contact the Homicide and Major Enquiry Team via 101 or call Crimestoppers anonymously on 0800 555 111.