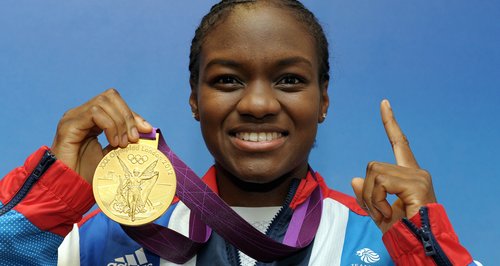 Nicola Adams has been forced to withdraw from this weekend's English National Championships following a burglary at her home in Leeds.

Adams and other family members were at home at the time but were not aware of the break-in, in which two cars, training kit and valuable personal possessions were taken.

Adams had been due to contest the women's 51kg flyweight division including a prospective final showdown against her Great Britain rival Lisa Whiteside.

Adams said in a statement:

'Nothing makes me prouder than boxing on home ground with the support I get from the nation.

'So, after much thought and discussion with England Boxing, I'm deeply regretful to have to pull out. It's not an easy time for me and my family. We would like to thank everyone for their understanding and support - the boxing team, the police and all my supporters.'

Adams had been due to fight on Saturday in what would have been her first fight in England since her gold medal triumph at London 2012.

Victory was likely to have taken her through to the Sunday final to face Whiteside - a former police officer - who won a world silver medal last year in Adams' injury-enforced absence.

The bout at Liverpool's Echo Arena was widely seen to have been an opportunity for Adams to reassert her dominance over her rival as part of preparations for next year's Rio Olympics.

'The most important thing is that Nicola and her family were unharmed and our thoughts and best wishes are with them.

'We were looking forward to Nicola taking part in the first ever England Boxing Championships in which the men and women's finals are held as part of the same tournament, however it is completely understandable that Nicola does not feel in any fit state to compete and we wish her all the very best in coming to terms with this upsetting incident.'