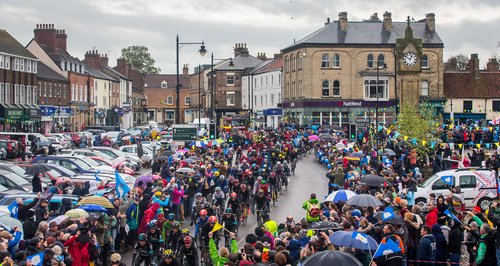 The second ever Tour De Yorkshire saw record crowds, as over 2 million spectators cheered on the cyclists.

Cyclists and organisers have been overwhelmed by the stunning support for the race which today’s winner Thomas Voeckler said "makes me want to come back next year!” and compared it to racing in a stage of Tour de France.

Thomas from Team Direct Energie added,
"When you see all the crowds on the road I am sure that in 20 to 30 years there will still be a Tour de Yorkshire so I am really happy that my name is on the winner’s list.”

He said:
"As a team we are privileged to be part of an event as incredible as this and have fans as engaged as they are."

Yorkshire has been transformed into a sea of blue and yellow as the county has got behind the second edition of the Tour de Yorkshire.

Mr Prudhomme, Director of the Tour de France, said:
"There have been huge crowds, huge enthusiastic crowds who respect the riders. The Tour de Yorkshire is on the podium for being one of the best bike races in the world and for me the best public for cycling in the world.

"The people of Yorkshire have passion and pride. I love what the Tour de Yorkshire has done for children who are watching this on the route and at the start and finish lines. These are memories that those children will never forget.

"The passion is growing and growing and Yorkshire is fast becoming the heartland of cycling.”

Stage 3 on Sunday saw an exciting start in Middlesbrough as riders faced the toughest stage yet over 198km.

The peloton raced through Great Ayton and Stokesley which were brimming with crowds before moving down through Northallerton, Thirsk which were full of cheering spectators.

Sutton Bank was the first of six categorised climbs and saw crowds as big as any mountain stage on the Tour de France.

The town centre was full in Helmsley and into the North York Moors National Park with a steam train lined up at Grosmont as the peloton passed the North Yorkshire Moors Railway Station.

More spectators lined the route at Robin Hood’s Bay and snaked through Whitby before the riders came in to Scarborough along the sweep of South Bay before a final sprint on Royal Albert Drive in North Bay to a heaving crowd.

Sir Gary Verity, Chief Executive of Welcome to Yorkshire said:
"Yorkshire is the true winner. The way the people of Yorkshire have taken this race to their hearts is overwhelming.

"The county is fast becoming the capital of cycling and that is down to the incredible support from communities who have turned out in their droves. Yorkshire you should be proud!”

The final stage promised to test the rider’s legs and with six categorised climbs and it lived up to the brutal profile.  The day saw many attacks with the pace never wavering, and there were some especially impressive turns put in by young British riders.

The race came down to a game of cat and mouse from 5km to go, with Nicolas Roche (Team Sky) and Thomas Voeckler (Direct Energie) storming into Scarborough to incredible levels of noise and support from the crowds.

With less than 1km to go, Voeckler made a move and outsprinted Roche to take the win, securing him the overall title in the process.

Overall top ten at the end of the race: