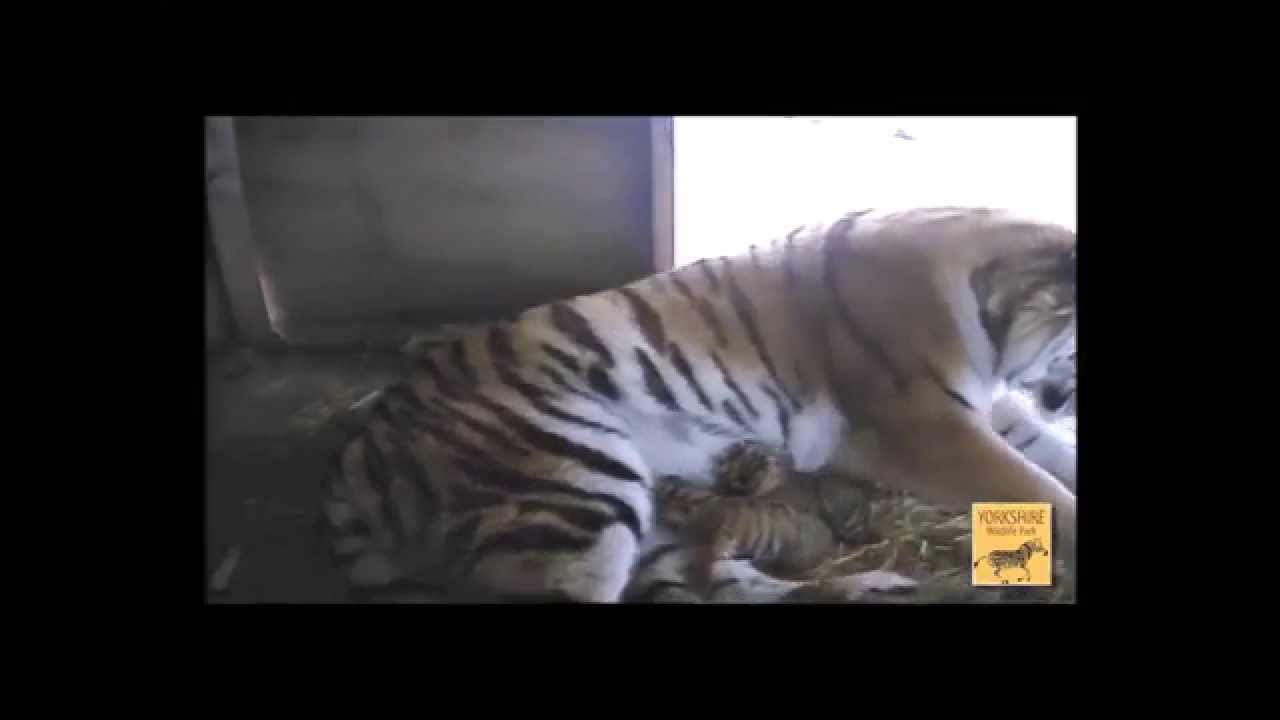 A wildlife park in Yorkshire has released CCTV footage of the birth of three tiger cubs.

Staff at Yorkshire Wildlife Park in Doncaster watched the birth of the Amur tigers live on camera on March 29.

The footage shows four-year-old mother Tschuna giving birth to the cubs before cleaning and feeding her new offspring.

'We watched the birth as it happened on the CCTV camera, as Tschuna had hidden herself away in the peace and quiet of the cubbing den.

'It was a very special moment and an incredible privilege.

'It was so heart-warming to see how Tschuna took to motherhood and how natural the new family is.

'Both the birth and her bonding to the cubs was all captured - it is truly enchanting footage and I am glad that we are able to share it with everyone.'

Tschuna moved to Dudley Zoo in the West Midlands after she was rejected by her own mother at birth at Wuppertal Zoo in Germany.

She moved into Yorkshire Wildlife Park's purpose-built two-acre reserve to take part in the breeding programme for endangered Amur tigers and was introduced to the cubs' father Vladimir in September 2013.

'Vladimir was a complete wimp even though Tschuna was tiny next to him.

'She made the first move but he was horrified. It was a slow courtship but developed with time and we now have three new Amur tiger cubs.

'This is a major success for Yorkshire Wildlife Park - the most important births we have had here so far.'

The cubs will not been seen by visitors to the park for some weeks but further footage will be released as the tigers grow.

Numbers of Amur tigers have reduced to around 450 in their native Russian Far East due to poaching and disappearing habitat.

The Yorkshire Wildlife Park Foundation raises money at the park to help big cats in the wild by supporting the Amur Leopard and Tiger Alliance.