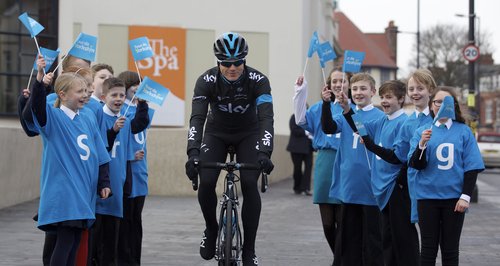 The race will be held over four laps of a 20km circuit around York with the same infrastructure being used for the Tour de Yorkshire later that afternoon.

The race will start at 11 o’clock, and with the closed roads, riders can expect significant crowds and an exhilarating racing atmosphere. British Cycling licensed riders from Elite, 1st, 2nd and 3rd categories will be able to enter.

'We promised from the start to bring more women’s racing to Yorkshire’s roads and by hosting this race and taking advantage of the spectators, race infrastructure and media spotlight already on York that day, we’ll show women’s racing off to the world.'

It’s hoped the Tour de Yorkshire women only race on Saturday 2 and the women only mass participation cycling event on Sunday 3 May in which hundreds of women are expected to take part, will encourage more women to see the health benefits of taking up cycling.

'This is a fantastic new addition to the calendar and a great showcase for women’s racing.  The York circuit is set for huge crowds and a superb atmosphere, so we look forward to an action packed day.'

'York is proud to be hosting this women’s race and showcase some of the UK’s best female racing talent.  It’s a great circuit to show off some of the beauty of York and spectators will be in for a fantastic race to come and watch.'

It is hoped the women’s race will be a part of the Tour de Yorkshire every year and grow year on year.

Meanwhile a women’s only mass participation cycle ride – the Cycletta – will take place on Sunday 3 May. Hundreds of women are expected to take part in the event which will include part of stage 3 of the Tour de Yorkshire.

Full details for the race, map and entry forms can be found on the British Cycling website - http://www.britishcycling.org.uk/events/details/128520/Women's-Tour-de-Yorkshire