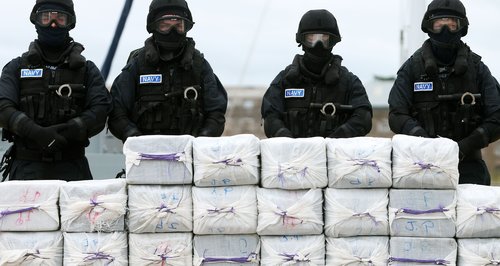 A pensioner from Bradford is among 3 men from West Yorkshire and Grimsby sentenced to between 8 and 10 years each over a cocaine smuggling plot.

They tried to bring £200 million of the drug across the Atlantic in a boat - but the journey descended into starvation, drought and drug abuse.

The 62-foot yacht Makayabella, was intercepted off the Irish coast last September laden down with 41 bales of the narcotics onboard.

John Powell, 70, of Silsden, West Yorkshire, was handed ten years in jail for skippering the boat.

Benjamin Mellor, 35, of Bradford, and Thomas Britteon, 28, of Grimsby, North East Lincolnshire, were both sentenced to eight years each for their roles as ``hired help'' in the venture.

The trio pleaded guilty to two charges each of drug trafficking and importation.

Their sentencing hearing in Cork Circuit Court depicted an error-strewn voyage from Venezuela towards the UK, which attracted the attention of the US, France, UK and Ireland.

Mellor, a drug addict and alcoholic, broke his wrist en route and had ripped open one of the bales of cocaine to get high on his own supply to fend off hunger six days after the crew ran out of food.

Drinking water was also running out when the yacht was stormed by the Irish Navy in the Atlantic 200 miles (322km) off the south-west coast of Ireland, in the middle of the night on September 22.

Inspector Fergal Foley, a Garda investigator, said the vessel was in a grim state.

``To be quite blunt, they were delighted to see the Navy,'' he said.

All three admitted immediately there was cocaine on board and were taken back to Ireland, where they were arrested as soon as they reached shore on September 25.

Cork Circuit Court was told Powell's son Stephen Powell, 48, from Guiseley, West Yorkshire, was a ``major player'' in the UK drugs underworld and the ``main man by a step and a half'' behind the operation.

He has already been sentenced to 16 years for conspiracy to import cocaine.