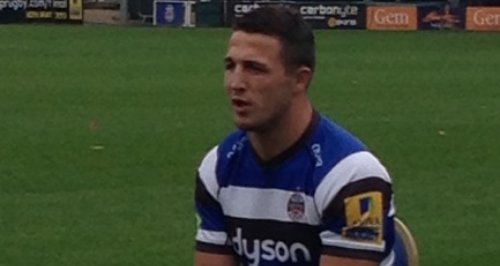 Sam finished his South Sydney Rabbitohs career with an NRL Grand Final victory - the club's first title in 43 years. He also became the first Englishman to win the prestigious man of the match Clive Churchill Medal.

Following the culmination of the NRL season he was named International Rugby League Player of the Year, again becoming the first Englishman to win this award. Now he is preparing to play a part in Bath Rugby’s challenge for domestic and European honours. Arriving at the Rec Sam said:

“The thought of taking to the field with the talented players here at Bath really motivates me. I’m here to work hard and learn the game. I just want to get my head down so that I can be in the best possible position to be an asset to the Club. I see Bath as the perfect learning environment for me, and am really looking forward to getting to grips with rugby union.”

“We’re hugely excited about what Sam can bring to this team. It’s not going to be an overnight process, but he possesses all the attributes to thrive in union. Sam’s going to complement the outstanding players we already have here at Bath. The guys in possession of the starting places have played outstandingly so far this season, so it won’t be a case of Sam walking into the team straight away, and he knows that, but he’s a talented player and we’re looking forward to seeing what he can bring to our side.”

“Sam’s achievements and performances in the NRL over the past year have been no less than extraordinary. The leadership and physical qualities that he will bring with him to the Bath team and rugby union are unquestionable.”