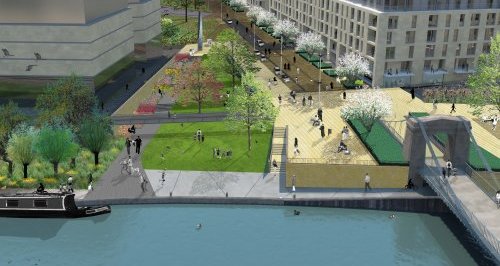 A £3.4 million project to refurbish Victoria Bridge is being carried out by Bath & North East Somerset Council to make the structure suitable for modern use for the growing population of Bath Riverside and link the Upper and Lower Bristol Road for people on foot and cyclists.

The design has been developed through discussions with English Heritage. Construction will involve the bridge being taken to pieces and reassembled with a series of new, steel components added to make the structure sufficiently strong enough to meet modern bridge design standards.

The form and appearance will be similar to the original. It will be painted dark green. Project completion is anticipated by the end of 2014.

"The Council is delighted to be making the financial commitment needed to restore one of Bath’s key pieces of infrastructure to support the growing local community and help people move around the city more conveniently. Cyclists are also better connected to National Cycle Route 4.”

“Bath’s great strength is symbolised by Victoria Bridge. We are a beautifully innovative city and the design by James Dredge in 1836 was the first example of his taper suspension bridges. This is a Grade Two Star listed structure and it will be rightfully refurbished for future generations to enjoy.”

People will still be able to use the temporary truss, which has been in place since 2010, to cross the River Avon whilst work is happening. However, a short series of minor 30 minute restrictions of the use of the Bridge, River a towpath will be required for safety reasons throughout the works programme. Temporary diversions will be in place during these times. The steps adjacent to the north tower will remain closed throughout the works.

Timings for forthcoming closures will be communicated during the course of the works via Twitter and the BANES Council website, on sign boards located at either end of the Bridge; at towpath level and at Weston Lock and Broad Quays moorings.

A more significant closure of the route across the bridge and the towpath will be required to permanently remove the truss, once the refurbishment works have been completed. This closure is likely to last for a fortnight during Winter 2014.