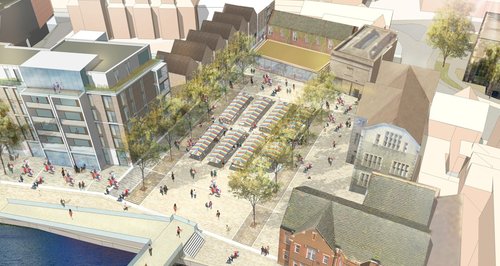 Workman are moving in to start building Riverside Square and the new Bus Station.

Riverside Square will be a paved area that can be used for public events.

Around the outside will be a new cinema, hotel and restaurants.

It'll replace the area that is currently the Riverside Square Car Park and the old council office building that’s been empty for two years.

We'll start to see this building being torn down in the middle of March.

The development of Riverside Square is costing £35 million which is being privately funded.

Mayor Dave Hodgson told Heart what he'd like the atmosphere to be like there when it opens in summer 2015:

"I hope we're going to have lots of people enjoying themselves, watching what’s going on on the river, the rowers, the John Bunyan boat going up and down and looking over St Mary's Garden which is really pleasant.

"They can spend time here, have a meal, have a coffee and then go into the town to do some shopping or go over to the cinema- there'll be a whole lot of thing to do in the town centre of Bedford"

The redevelopment of the bus station is being paid for by the council and is costing around £10 million.

Mayor Hodgson says it's important to improve the appearance of the bus station because it's the first and last impression some people visiting the town will have.

While the bus station is being redeveloped buses wont be stopping there so people who use the bus will need to check to see what alternative stop they should use.