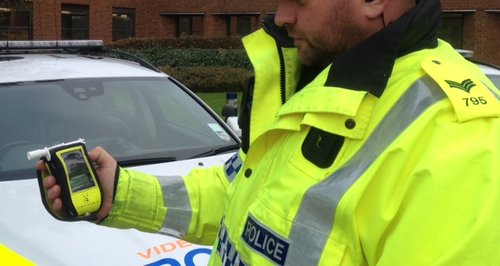 Last year police arrested more than 200 drink drivers in Herts and Beds throughout December- they're now launching their 2013 Christmas campaign to stop people getting behind the wheel over the limit.

It's the season where a lot of people will be drinking alcohol to celebrate Christmas and New Year.

Although most parties will be happening in the evening, Chief Inspector Richard Hann says a lot of drink drivers get caught in the morning:

"I think there a perception that people will go to sleep at night and wake up absolutely fine but there are statistics to show that people going to work at 6, 7 ,8 'o' clock in the morning are still over the limit"

For the first time this year people in Hertfordshire can now report those they suspect are regular drink drivers using the police website.

Although to get immediate police attendance they're urged to call the reporting line 01707 354111.

In Bedfordshire the number to call is 101.

During the month there'll still be the usual 19 traffic officers on duty in Beds, Herts and Cambs but there will be more of a focus of catching drink drivers.

Heart asked Sargent Steve Andrews what they look for:

"If you see anybody doing something out of the ordinary, if their driving is a little bit irritate, if they're crossing the white lines, they might be driving at night without putting their headlights on.

"Just little things that most of us take for granted but if you've had a few drinks you might not think about".