Fire crews have been fighting a fire at the old Town Hall building in Bedford this morning.

Emergency services were called to the abandoned building in St Paul's Square after a call from a member of the public at 3.04am. It's believed the fire started on the second floor of the six-storey office block.

The 1960's concrete eyesore is part of the town centre redevelopment - and was waiting to be demolished.

A spokesman for Bedfordshire Fire and Rescue says 6 fire engines including the aerial platform ladder are at the scene and fire crews are likely to remain in place through the afternoon. 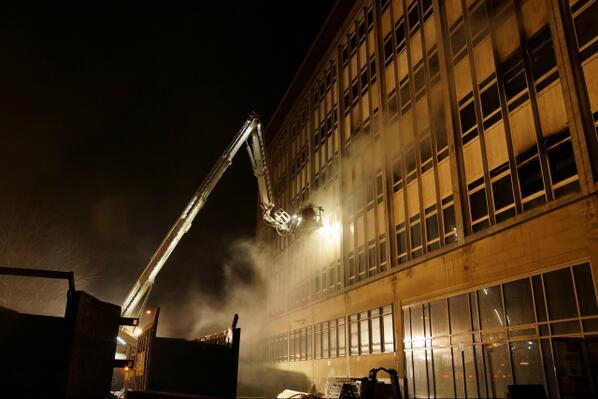 Relief crews were sent from Woburn, Shefford and Biggleswade fire stations to replace crews that had been tackling the fire since 3 a.m.
Throughout the morning, firefighters wearing breathing apparatus tackled the fire in the stairwell and on several floors inside the building; and also from the aerial platform, outside.
Earlier road closures have now been lifted.
A spokesperson for Bedfordshire Fire and Rescue Service said: "Our firefighters and control staff worked extremely hard throughout the night to contain the fire. It was a difficult and complex fire."
The Fire and Rescue Service began to scale down the incident from 11am, with 2 fire crews remaining at the scene well into the afternoon.