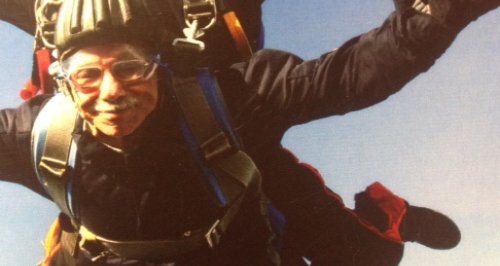 A 76 year old campaigner from Sandy has told Heart he wont let his age get in the way of a 13,000 foot charity skydive.

He says it might not sound like a suitable activity for a 76 year old to be doing but he's cleared it with his doctor and because it doesn't involve anything too physical he says it's not too bad:

"This time, the chap I'm with will have to shout because since I did my last one I've lost a bit of hearing"

Mr Lynch is raising money for Breakthrough Breast Cancer after his friend and Chairperson of Central Bedfordshire Council suffered from the condition.

He told Heart he used to have a dog that helped him look after his wife before she went into a hospice and says he would like other people to benefit from this.

The skydive will take place in Cambridgeshire on 31st October 2013 (weather dependant) and he says he's not at all nervous.

He says he's got the support of all his friends and family who think what he's doing is great.

If you want to support Ken Lynch you can donate by clicking here.