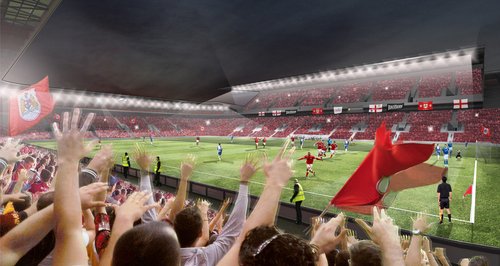 Work on Ashton Gate could start early next year with the demolition and rebuilding of the Wedlock Stand. It would eventually become a 27,000 all seat stadium.

City’s Board of Directors will now aim to make a final decision on whether to push on with the stadium redevelopment at their current home or move forward with the Ashton Vale plans by the end of January or early February 2014.

“I want to say thank you to the whole team who have been involved in putting the planning application together; they’ve worked tirelessly for the last year to a year and a quarter. I’m delighted to say today that we’ve got a successful result with a unanimous agreement to pass planning.

We move on. That’s another step in the road. We now need to sit down with the Council and discuss further the Section 106 agreement and the various other documents that go with a planning application. That starts tomorrow.

Hopefully we will bring this all to a conclusion in the next few weeks, which puts the club in the position by the end of January, perhaps the start of February, to be in a position to make a considered choice between the two schemes (Ashton Vale and Ashton Gate redevelopment).

“Then the club can move forward.”