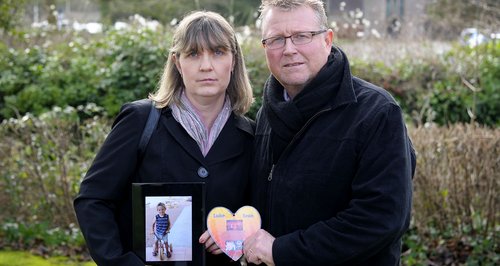 A Coroner has ruled that there were "missed opportunities'' in the care received by a four-year-old boy recovering from heart surgery at Bristol Children's Hospital.

Avon coroner Maria Voisin said she had not heard evidence of any "gross failures to provide basic care'' in the treatment Sean Turner received on Ward 32 of Bristol Children's Hospital. Ms Voisin recorded a narrative conclusion, ruling that Sean died from a combination of a cerebral haemorrhage, venous thrombosis and a congenital heart defect. nShe also said that having heard evidence of changes the hospital trust made in the wake of Sean's death she would not be writing a prevention of future deaths (PFD) report to the trust.

Sean, from Warminster, Wiltshire, died in March 2012 from a brain haemorrhage after previously suffering a cardiac arrest, six weeks after he underwent corrective heart surgery. Sean's parents Steve and Yolanda Turner, aged 47 and 45, told the inquest how they begged doctors and nurses to help him.

Mr and Mrs Turner accused doctors of transferring their son to Ward 32 from intensive care too soon and said they missed signs of his worsening condition, with rising blood pressure, vomiting and fluid loss from his chest. Mrs Turner told the inquest:

"Sean was deteriorating. We could see it but nobody listened to us. We asked so many times and so many staff - from ward doctors, outreach nurses, cardiac liaison nurse and the nurses - if Sean could go back to intensive care as he had been better there. We were told no beds or that simply he was not critical enough.

Over four days Sean had increasing heart rate, was constantly being sick and was becoming so chronically dehydrated he was grabbing tissues used to cool his forehead and suck the water out of them. He kept asking for drinks but we were told he was on a fluid restriction to clear out his drains and this was normal procedure after a Fontan procedure.

This was not normal, out little boy was switching off, in terrible pain, struggling to breathe and had an increasing heart rate. We tried so hard to get him some help. Nothing happened, nobody seemed to help. Nurses were concerned but they seemed too busy to give the time needed to care for Sean at the level he needed.

Every nap he had I sat and cried as I felt so desperate and so helpless. Why would no one listen?''

We will never forget the days on Ward 32 and can never understand how a child can be left to suffer for so long. How was this supposed to be a specialist cardiac unit in a centre of excellence, yet no one recognised Sean's deterioration? His arrest was preventable because all the signs had been there. Events on Ward 32 dashed Sean's chances of survival.''

After collapsing Sean was transferred to intensive care, where he remained for 11 days before being returned to the ward.

Mrs Turner described it as the "worst news'' when they were told Sean was being returned to Ward 32 and the "beginning of the end''.

She said nurses did not respond to automatic alarm calls on her son's monitoring equipment, did not complete regular fluid checks and did not fill in his record charts. He suffered a cardiac arrest on February 16 and returned to the intensive care unit where he remained until he died on March 15. Mr Turner, a carpenter, described how Sean went limp and lifeless after a cardiac arrest:

"No parent should ever be put in the situation where they go into a safe environment and have to plead for four days for help and end up having their child having a cardiac arrest in their arms. We now have to live with that horror for the rest of our lives. The whole management of Sean's care, communication, death review and now our complaint has been shambolic.

Sean suffered a catalogue of errors and throughout individual nurses on Ward 32 were concerned for Sean but appeared not to have the time or give the level of care he so desperately needed.''

Mr and Mrs Turner claim their son's death was not isolated and other children with heart problems have died at the hospital. Up 10 families are believed to be taking legal action against the University Hospitals Bristol NHS Foundation Trust over treatment on Ward 32.

Doctors at the hospital said Sean was regularly monitored and his parents' concerns taken on board. In a number of statements read out to the court, staff said they followed all procedures set down in the "very difficult circumstances'' and that Sean's cardiac arrest was "sudden and unexpected''.

A senior nurse said there were "deficiencies'' in Sean's care and added there were problems with staffing levels on the ward. William Booth, matron and lead nurse for paediatric critical care services, said that since Sean's death - but not as a direct result of it - staffing, communication and training had improved on the ward.

A five-bed high dependency unit had also been set up and the trust had commissioned its own independent review of paediatric nursing across the hospital with its findings implemented. Cardiac nurse specialist Diane Barlow admitted making a mistake in changing Sean's chest drains on the day he suffered the cardiac arrest.

But she denied Mr and Mrs Turner's claim that she removed the femoral line from his groin - over doctors' fears it was infected - a few minutes before he collapsed, saying a senior nursing colleague had done it.

Medical experts told the inquest that the care Sean received fell below expected standards after undergoing the Fontan surgery on January 25 to make his heart work more efficiently. Dr Ri Liesner said Sean was not properly anti-coagulated, meaning a blood clot was discovered a day after he suffered the cardiac arrest.

Dr Duncan Macrae said Sean should have been placed on a high dependency unit - one level down from intensive care - which was not then available on Ward 32, and a procedure known as fenestration should have been considered to reduce his chest drain losses. Following Sean's death and that of seven-year-old heart patient Luke Jenkins, from Cardiff, who died nearly a month later, their parents made a complaint to independent healthcare watchdog the Care Quality Commission.

The CQC carried out an unannounced inspection and issued a formal warning to the hospital about standards on Ward 32. It said the ward failed to meet three essential standards of patient safety - on staffing levels, staff training and support, and overall care and welfare of patients. Changes have since been made.

Ms Voisin said there were "lost opportunities'' in the treatment of Sean but said this did not amount to a neglect verdict because there was not a gross failure to provide basic care. She said:

"Sean Turner died on March 15, 2012 from complications from the Fontan operation undertaken on January 25, 2012. Following surgery he developed excessive fluid loss from his drains; elevated pressures in the Fontan circulation; the development of a thrombosis.

The thrombus required treatment and Sean died due to an intra-cerebral haemorrhage which is a known complication of the treatment of thrombolysis. In addition there were lost opportunities to render medical care or treatment to Sean in this post-operative period which included management of his anti-coagulation from February 6 and not considering fenestration between February 8 and 16.''

Ms Voisin said she would not be writing to the hospital trust to recommend that changes are made to prevent future deaths:

"I am aware that the trust has made lots of changes since Sean's death and I do not consider that I need to make any report in connection with this matter.''