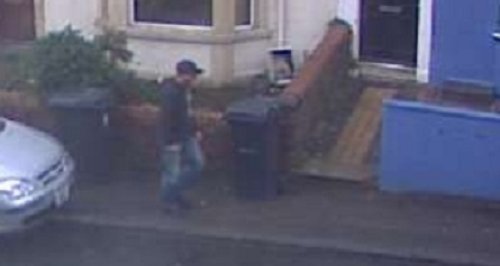 Police have released a CCTV image of a man they would like to speak after a 76-year-old woman was assaulted during a robbery at her home in Bristol.

Jean Taylor was left with nasty head injuries following the incident at her home in Green Street, Totterdown, at around 2pm on Tuesday 28 January.

“We have obtained CCTV footage of a man walking along Green Street around the time of the incident and we are very keen to identify who it is. While it is not possible to see his face, I would like the public to look closely at his clothing.

He is described as wearing a grey hooded top, a baseball cap, faded blue jeans and dark shoes. I would appeal to the person in the image to come forward, or if anyone thinks they know who it is, please let us know as soon as possible.

Jean is still recovering from the incident but she has been overwhelmed by the support of the local community, who have donated flowers, gifts and even raised money for her. It is very heart-warming to know she has such support after going through such a horrible ordeal.”

“I would also like to remind people there is a reward of up to £3,000 being offered by the charity Crimestoppers for information given to them via their telephone number 0800 555 111, which leads to the arrest and conviction of the person responsible.”

If you can help, please call via the 24-hour Police Enquiry Centre on 101 quoting reference number 9565/14.