David Attenborough Gets Freedom Of Bristol 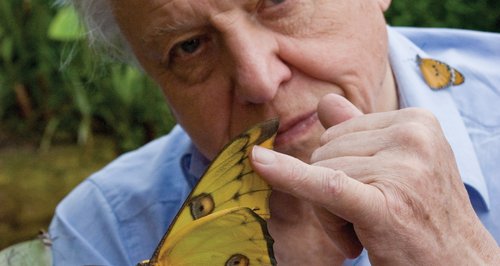 Sir David Attenborough has been awarded the Freedom of the City of Bristol - the highest honour the city can bestow.

The award follows a close association between Bristol, the BBC's Natural History Unit, which is based in the city, and the renowned naturalist and filmmaker.

Dozens of fans attended a ceremony at City Hall in Bristol to watch as Sir David's name was added to the Roll of Honorary Freemen of the City. 87 year old Sir David made a short, humble speech in which he accepted the honour on behalf of the BBC's Natural History Unit. He told the council chamber:

Sir David paid tribute to Christopher Parsons and Desmond Hawkins, who established the unit in 1957:

"I had the honour and luck and privilege to be asked to join these two men. The honour belongs to them. I have spent 50 years with the unit and it has been my huge privilege to do so.
In accepting this great achievement and thanking you all for the very, very generous things that you say, I do so in the name of the BBC Natural History Unit which is a world-class institution.
Thank you very much on their behalf and truly on my behalf. I am truly grateful.''

Sir David's career has spanned nearly six decades. Over the last 25 years he has brought natural history to the world with programmes such as Life On Earth and The Living Planet.

He is also a former senior manager at the BBC, having served as controller of BBC Two and director of programming for BBC Television in the 1960s and 1970s. Sir David is the only person to have won a Bafta in black and white, colour, HD and 3D.

During the hour-long ceremony, councillors from Bristol City Council paid tribute to Sir David. Helen Holland, leader of the Labour group and who represents Whitchurch Park ward, told the hall that the name "Bristol'' features on all of Sir David's DVDs:

"Freemen of the city are allowed to graze their sheep on the Downs. We are going to amend that order so that you can graze your silverback gorillas on the Downs any time you like.''

The council was told that Bristol produces a quarter of the world's natural history programmes. Lord mayor of Bristol Faruk Choudhury said:

"He is a man who is widely acknowledged as the face and voice of natural film making, in a career that has endured for more than 50 years.
He has been called the great communicator, the perilous educator and the greatest broadcaster of our time.''