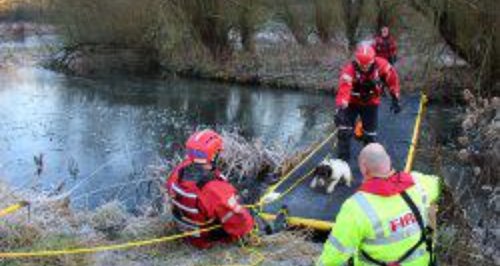 A dog which fell through ice on a pond in Bristol has been rescued by firefighters using an inflatable walkway.

2 year-old Springer spaniel Milo had been walking with his owner when he slipped into water at Eastwood Farm nature reserve in Broomhill, Bristol.

Milo was in the icy water for around 25 minutes before he managed to climb on to an island in the middle of the pond. Responding to a 999 call from the dog's owner, firefighters from Avon Fire & Rescue Service used an inflatable walkway to reach the island.

Two firefighters walked across to Milo and were able to put a lead on him and walk him to safety. He was reunited with his owner unhurt but was "cold and wet''. An Avon Fire & Rescue Service spokeswoman said:

"Avon Fire & Rescue Service would like to remind people to take care when outside during the cold weather. Never venture on to frozen water. It may look solid but can break easily and anyone falling in will quickly feel the effects, which could lead to hypothermia or worse.
Always dial 999 and ask for the fire and rescue service. We have the equipment and training to deal with incidents of this nature.''