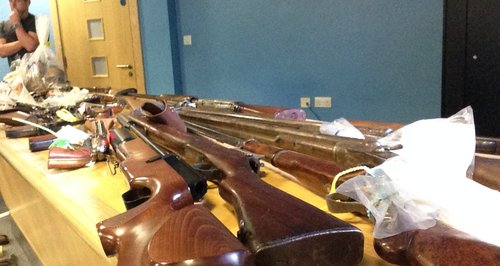 Avon and Somerset Police are joining forces around the country to hold a fortnight long firearms and knife surrender.

The surrender is being supported by National Ballistics Intelligence Service (NABIS) and the Association of Chief Police Officers (ACPO) to encourage local people who wish to safely dispose of a firearm or knife.

'Many firearms are held by members of the public who may not realise they are illegal. Some may have inherited the items from relatives and think that the age of weapon means it legal. We are aiming to give these people a safe place where they can dispose of any firearm, knife or ammunition to reduce the risk of these items becoming involved in criminality. '

These bins can be used to deposit any knife or bladed article, but any firearm MUST be handed in at the front desk of these stations.
During the surrender, those handing the items in will not face prosecution for their illegal possession. However, the history of each live weapon will be checked for evidence of its use in crimes.
The sentencing guidelines for possession for sale or transfer of an unauthorised firearm or ammunition have also been raised. This offence now carries a maximum penalty of life.

“The purpose of this surrender is to offer those people who may not realise they have an illegal firearm to surrender it without fear of prosecution for this offence. I must stress that we will be taking information from those people handing in firearms and we will be running some background checks to see if that weapon has been used in a crime.

We will accept any firearm or knife, but we are particularly keen to receive ornamental knives, lock knives, butterfly knives, WWII weapons – any weapon which could cause serious harm if in the wrong hands.

I would also urge people to think about the consequences of keeping an illegal firearm or weapon. The law is very stringent around weapon possession and the maximum penalty of possessing an illegal firearm is life imprisonment. Firearms license holders can be reassured that these measures merely enhance their rights and privileges to own firearms, by removing the dangerous ones from the wrong hands.”

There is a definition of 'weapons' HERE