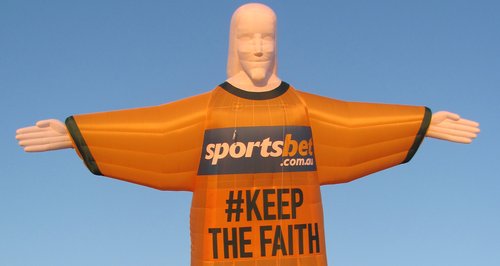 It would need over 574,525 footballs to fill the whole hot-air balloon envelope.  Lindsay Sadler, Production Director at Cameron Balloons explains:

"Technically this project has been very challenging, crafting over 3 kilometres of fabric and nearly 8 kilometres of thread into an aeronautically designed, fully-functional special-shape lighter-than-air aerostat all within 4 months. The balloon was commissioned as part of a controversial advertising campaign promoted by Sportsbet Australia. The balloon was made in the Bristol factory under strict confidentiality rules so as not to spoil the Sportsbet media splash and we are delighted to say that, even when we completed the test flight, we were still able to keep it under wraps - which is not easy when the balloon is over 42 metres tall and from finger-tip to finger-tip stretches in a span of 41 metres."

The actual statue was built in 1931 and voted by over 100 million people as one of the new wonders of the world. 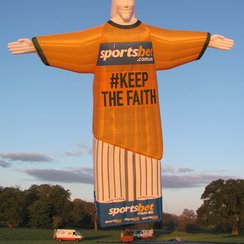 Vital statistics for the hot-air balloon:

Gross Volume = 3327cu.m which is 117,500cu.ft
Envelope (Fabric elements of the balloon) weight 335 kg
Fabric usage = 3286metres
Total length of all the seams is approximately 7.6 kilometres
Envelope Dimensions = 42m tall with a span of finger-tip to finger 41m