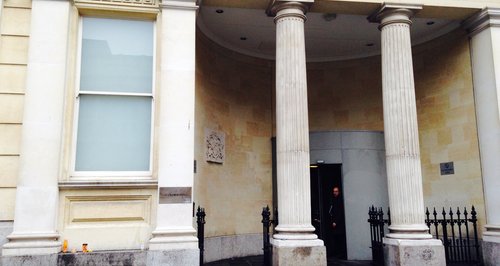 A woman from South Gloucestershire who falsely accused her boyfriend of rape so she would have an excuse for failing her legal exams is facing a jail sentence after being found guilty of perverting the course of justice.

30 year old Rhiannon Brooker, of School Road, Frampton Cotterell, claimed Paul Fensome, 46, forced her to have sex with him on 11 occasions and faked injuries to suggest he beat her. The law graduate even alleged Mr Fensome caused her to have a miscarriage by punching her in the stomach.

During the eight-week trial at Bristol Crown Court, jurors were told Brooker falsified the allegations because her party lifestyle led her to fail her bar assessments. She is said to have told an exam committee at the University of the West of England that her performance suffered from "extenuating circumstances''.

Mr Fensome, a 6ft 8in tall heavy metal fan, was arrested, charged and held in custody for 36 days before police realised there was no evidence against him.

Brooker, denied 20 charges of doing an act tending and intended to pervert the course of justice between May 2011 and January 2012. The charges related to 11 made-up claims of rape, eight assaults and one of false imprisonment.

After nearly 21 hours of deliberations, the jury of 10 men and two women found Brooker guilty of 12 charges - related to five false rape claims, six assaults and one of false imprisonment. Jurors failed to reach verdicts on the other eight charges and were discharged by Judge Julian Lambert.

The prosecution is not seeking a re-trial and Brooker, who was released on bail, will be sentenced on June 26.

"One of the reasons for her false allegations was that she was living an active social life in Bristol and not doing the work required to pass the assessments. So she falsified the allegations in order to give substance to her extenuating circumstances forms.

Her knowledge of criminal law and procedure derived from her law degree course in Birmingham and was likely to be greater than that of most rape complainants. The prosecution alleges that she knew that the course of justice was being perverted and intended to pervert the course of justice throughout that period.

When discrepancies were revealed and put to Brooker, she continued to maintain her account in the face of evidence to the contrary. In addition, prior to her initial reports, Brooker was responsible for infliction of injuries upon herself which indicates the considered nature of these false complaints.

After Mr Fensome had been charged, Brooker deleted text messages from her phone which would have pointed to his innocence.''

Mr Bartlett told the court that "confident and outspoken'' Brooker took a law degree at Birmingham City University before moving to Bristol in September 2010. She attended the University of the West of England to become a barrister by taking Bar vocational course qualifications.

The court heard that shortly before Brooker moved to Bristol, she told colleagues at a store where she worked in Birmingham that Mr Fensome raped her. She then turned up to lectures in Bristol with facial injuries and bruising, telling students he attacked her because she wanted to break up with him.

In May 2011, she told police he had attacked her, embellishing the story with claims of physical assault and false imprisonment. She told a friend she was pregnant but six weeks later told them she had lost the baby because her boyfriend punched her in the ribs.

Mr Fensome, a Birmingham railway signalman, denied the assaults, describing them as a "load of rubbish'', and had "cast-iron alibis'' for the dates.

Brooker did not wish to see him and when he gave his evidence she sat behind a screen in the dock. Mr Fensome told jurors:

"We had a loving relationship and the sexual relationship was the same. I've never hit another woman in my life. I didn't force sex on her in any way.''

"Eventually the Crown dropped the numerous charges against Paul Fensome. Taken as a whole, the evidence showed that there was no longer a realistic prospect of conviction. Expert opinion was obtained which suggested that those injuries of Brooker that were photographed were self-inflicted.

Brooker seemed oblivious to the impact of the false allegations on Mr Fensome's family, causing distress, disruption and expense. In addition, Brooker deceived other students and her tutors who committed time and emotional support to her cause.

We suggest that the defendant has an inherent tendency to fabricate allegations and needs always to be the centre of attention. She has never lost that tendency or need, with disastrous consequences for herself and those around her.''

The court heard Brooker sat the first four of her 12 assessments for the bar course and persuaded the extenuating circumstance committee to let her sit them all at a later date. She eventually withdrew the rape allegations, confirming they were false, and admitted injuries seen by witnesses were self-inflicted.

"The allegations were not true and I am sorry I made them. I find it very difficult to understand why I said these things. I believe that in some funny way I have hit out against Paul as he was close to me - the nearest target of those unresolved feelings of anger - and I regret the hurt that I've caused him as a result.

I am trying to work hard with these feelings and I understand that they have to be resolved and put behind me.''

When detectives told her of the decision to drop the charges against Mr Fensome, she became tearful, the court heard. The following day she was found slumped against a tree by a river with a bottle of vodka and a strip of anti-depressants.

Judge Lambert ordered the eight counts to which the jury were unable to reach verdicts to lie on file.