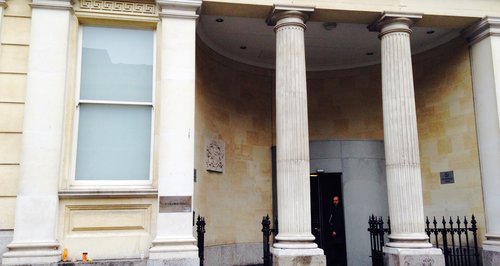 Seven Somali men who were part of an inner city sex ring involving the abuse, rape and prostitution of teenage girls in Bristol have been jailed for more than 40 years.

Victims aged between 13 and 17 were preyed upon, sexually abused and trafficked across Bristol to be passed around the men's friends for money. Many of the girls were groomed to view the abuse as a normal part of being the "girlfriend'' of a Somali man, as it was said to be "culture and tradition'' to be raped by their "boyfriend's'' friends.

On one occasion, a 13-year-old girl was raped four times by three different men, having been trafficked across Bristol to a Premier Inn by 22 year old Said Zakaria.

Police investigating the case rescued one 14-year-old victim from a cupboard in a flat, where she was found weeping "they made me do stuff'', wearing only her underwear.

The case, now the subject of serious case reviews, follows similar exploitation of young girls across English towns and cities such as Rotherham, Rochdale, Oxford and Telford.

Eight were jailed for a total of more than 70 years in June, while the remaining seven defendants - including one who featured in both trials - were sentenced on friday.

Judge Julian Lambert imposed sentences of between two and 11 years, with a combined total of 40 years and six months, describing some defendants as "merciless''. He said:

"You have all brought deep shame on your families, along with all the damage you have done. You were all brought up to know what proper standards of behaviour are. As well as deep, deep concerns for the victims of your crimes, I also have some concern for your families, who are not responsible for your actions. You are.''

In the second trial, Mohamed Jumale was convicted of one count of rape against the second victim, known as Complainant 2.

Jumale was convicted of aiding and abetting his brother, Omar Jumale, in sexual activity with Complainant 1 - telling her to have sex with his brother to prevent him from turning gay.

"Love flowed only one way and was reciprocated only with lust on your part,'' the judge, jailing Mohamed Jumale for 10 years, said.

"You persuaded your girlfriend to have sex with three different men, including your brother. What you did was akin to causing a form of prostitution. To say you took advantage would be a significant understatement. You preyed on her affection for you in a highly cynical way.''

The judge, who imposed a Sexual Offences Prevention Order (SOPO), described the rape on Complainant 2 as a product of Jumale's "appalling lust''.

Jumale's brother Omar was sentenced to two years imprisonment, which he will serve in a Young Offenders Institution, for having sex with the 13-year-old girl.

Mohamed Dahir, 22, was jailed for two years for causing or inciting Complainant 1 into child prostitution.

Said Zakaria, 22, was also made the subject of a SOPO, and jailed for 11 years for two counts of rape and two counts of sexual activity with a child against Complainant 1.

He was also convicted of trafficking the girl, then aged 13, across Bristol to take part in a "sex party'' in a hotel room at a Premier Inn. The judge said:

"While at the hotel you raped a 13-year-old girl twice, once in the bedroom and once in the bathroom. When you didn't get the sex you hoped for you took it by force. That force was significant. Your victim was injured as a consequence of your forceful lust. The repeated humiliation of a small 13-year-old girl was completed in a rough, callous and very nasty manner. You behaved without humanity and simply took what you wanted, leaving your victim totally humiliated and bleeding.''

The judge ordered Zakaria to serve the 11-year sentence alongside the five-year sentence for drugs offences he was handed in the first trial.

Jusuf Abdirazak, 20, was jailed for seven-and-a-half years for the rape of the 13-year-old girl, Complainant 1, at the Premier Inn.

Abdirazak was captured on CCTV booking the hotel room, using his driving licence as identification. The judge said:

"I assess you as being responsible for an opportunistic rape which you perpetrated on a little girl of 13 who had been recruited for a sex party at a hotel. When a 13-year-old girl was left bruised and battered by two rapes by another, you took her by force. It was cynical, callous and very nasty. You were merciless. You behaved without humanity and with no pity whatsoever.''

Abdirashid Abdulahi, 21, was jailed for four years for the rape of a 16-year-old girl, known as Complainant 4.

Sakariah Sheik, 21, was jailed for four years for raping a girl, aged 16 or 17 at the time, known as Complainant 5, and sexual activity with a 13-year-old girl, Complainant 1.