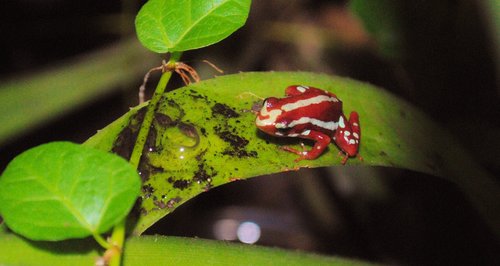 Delighted aquarists at Bristol Aquarium are celebrating the arrival of dozens of rare phantasmal poison frogs, believed to be one of the most toxic amphibians on the planet.

The World Conservation Union considers the phantasmal poison frog to 'Endangered', which means that it faces a very high risk of extinction in the wild.

The species is now thought to survive in only seven sites on mountains in parts of Ecuador.

Bristol Aquarium Curator, Dan de Castro, said: ''The phantasmal frog has a fascinating, and highly complex, lifecycle which is difficult to successfully replicate in captivity and completely unlike our native frog species.

''The females lay up to 40 eggs on a leaf which are then fertilised by the male. He then guards the eggs for up to two weeks until the developing tadpoles begin to wriggle free of their jelly-like egg cases, at which point he pulls them onto his back using his back legs and carries them to a nearby pond or puddle.

''They can then take anything up to two months to develop into tiny replicas of their parents; first growing their back legs, then their front legs and finally reabsorbing their tail, before finally leaving their fully aquatic life behind them,'' he added.

Phantasmal frogs are one of the few poison frog species that can be raised in large groups, so the aquarium is able put groups of tadpoles together in the 'paddling pool' as they develop.

''We use a special tadpole diet to feed them and ensure they get the correct balance of nutrition and vitamins which will enable them to fully metamorphose into adults,'' he added.

Like other species of poison dart frog it is thought that the phantasmals develop their toxicity as a result of their diet which includes small insects. Scientists have discovered that an extract from the skin of the phantasmal poison frog Epipedrobates tricolor can block pain 200 times more effectively than morphine, and without addiction and other serious side effects.