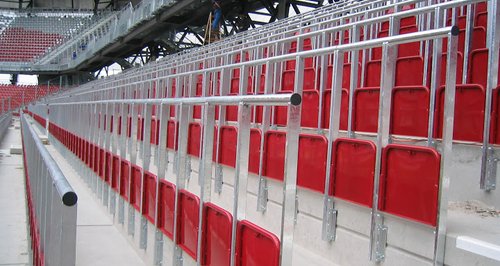 The club aims to redevelop its Ashton Gate home, starting this summer, and may include rail seating subject to the relevant legal hurdles being cleared in two of its stands. Initially the “safe standing” areas would only be used during Bristol Rugby matches held at the stadium as the current regulations prohibit their use for football matches.

But following consultation with its clubs, the Football League has agreed to lobby the Government for a change in the rules to permit safe standing areas for football matches. Football League chief executive Shaun Harvey said:

"Consultation has given us a better understanding of the wide range of views held by clubs on this issue and we will take our cue from the prevailing opinion.”

Campaigners, led by the Football Supporters’ Federation, hope this is another major step in the direction of the introduction of safe standing areas in England. And Bristol City FC – a confirmed supporter of rail seating – have installed a demonstration block at Ashton Gate as an example of its benefits in a bid to give others an idea of what could be expected if legislation was changed.

“If we are given the relevant permissions, this could be a great opportunity for Bristol City FC to become the first club in the Football League to install rail seating, as well as becoming a showcase for other teams up and down the country. At last week’s Football League meeting there was clear strong support from clubs for the League to approach the authorities for a relaxation and change in the regulations.

We’ve received feedback from our supporters who are keen for the option of safe standing and with the proposed redevelopment of Ashton Gate and Bristol Rugby’s move to the stadium this summer, this seems to be the right time to explore this further.”

Redevelopment of Ashton Gate Stadium – which from 2014/15 will play host to Bristol City FC and Bristol Rugby – should begin this summer. The all-seated Wedlock Stand will be replaced with a brand new stand, which could contain 2,202 rail seats to the rear of the stand behind the goal if regulations permit it.

Further redevelopment of the stadium in the Dolman Stand, to the side of the pitch, could see a further 1,568 rail seats incorporated in the stadium, which has been home to Bristol City FC for more than 100 years.