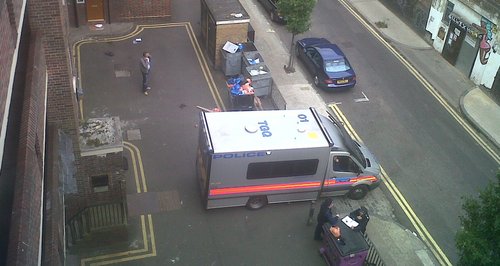 Detectives have made dawn arrests in London as part of an investigation into a £1m courier fraud investigation.

The operation was mounted by Zephyr, the south west regional organised crime unit, following a three month investigation into the nationwide scam.

More than 300 people, mainly vulnerable elderly, have been victims of the elaborate fraud, being duped out of up to £1m by the scammers.

Today officers executed search warrants at three separate properties in the Tower Hamlets area of East London. Three men, all aged 18, have been arrested on suspicious of fraud offences. They were arrested by officers from properties in Quaker Street and Thrawl Street.

The joint Zephyr Metropolitan Police operation follows a three month complex and painstaking operation by detectives at Zephyr supported by colleagues in the Avon and Somerset, Devon and Cornwall, Dorset, Gloucestershire and Wiltshire forces.

The number of people who have been victims of courier fraud in the south west region has topped 300 but it is possible many more victims - embarrassed by the scam - may not have reported incidents to the police.

Around nine out of 10 people contacted have been aged over 60, being duped out of various cash sums, including one individual, who handed over £40,000.

DCI Will White of Zephyr said: ''Todays arrests should provide some reassurance that we are working with colleagues in forces in the south west to tackle this despicable form of crime which preys in the main on the elderly and vulnerable.

''We hope it also sends a strong message that we will target those who prey on the elderly and vulnerable. We will find out who you are and come for you!

''It is possible that some victims may feel too embarrassed, ashamed or humiliated to come forward and report that they have been duped. We would like to hear from these people.

''The more we talk about this scam and the more people who are made aware of it, the less likely that they are to become victims. We need people to spread the word. If you have elderly and vulnerable relatives, neighbours, colleagues and friends warn them to be vigilant and on their guard for telephone calls of this kind.

''We are particularly appealing to three broad groups of people to help us prevent these crimes: Children, grandchildren, relatives and friends of the elderly and vulnerable - please share this advice and if concerned, ask questions. We want taxi company owners and drivers to be vigilant, especially if approached or asked to courier small packages to London on half of elderly people. And thirdly, we want banks and other financial institutions - and in particular counter staff to be suspicious if elderly customers uncharacteristically draw large amounts of cash and query this.

''Broadly the same approach has been used by a number of fraudsters across the south west and in other parts of the country. The scam started in the south east of England but has spread much wider,'' said DCI White.

The perpetrators contact potential victims, who are normally elderly,by telephone, purporting to be a police officer.

They are then encouraged by the fraudster, who uses elaborate and convincing reasons to to withdraw large sums of cash, which they are then asked to send to London by taxi or a courier, or by electronic transfer of large amounts to a fraudulent bank account .

The culprit claims the money is potential evidence for an investigation and that it is needed so it can be forensically examined.

Another scam involves someone claiming to be a London-based police officer, who informs the victim that two people have been arrested in the capital. When arrested they had in their possession, bank cards which contained details of the victim.

The victim is asked to call the bogus officer and is given a false collar number and telephone number which helps reassure the victim. Because the fraudster does not replace his phone however, the unsuspecting victim dials but is still connected to the original caller but under the impression they have reached a genuine police officer. The fraudster then encourages the unsuspecting victim to provide private banking details and may also be asked to withdraw cash.

DCI White confirmed: ''The police and the banks will NEVER ask you for banking details or PIN numbers on the phone. Similarly, they would never send a so-called 'courier' to collect bank cards or money.

''In previous incidents the victims did the right thing when they became suspicious of callers. They hung up the phone and called the police. They waited until they could hear a dialling tone or used a different phone to call us, ensuring that the scammers were't still connected to the line.''