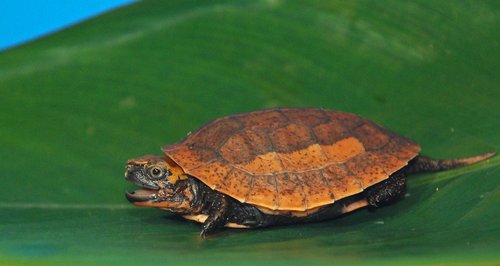 It's six weeks old, it weighs just under 15 grams and is the size of a matchbox.

This tiny Vietnamese box turtle has just hatched at Bristol Zoo - and its keepers say they're thrilled. Its so precious - they're keeping it off-show at the moment in a special climate-controlled room. But once it's old enough, it'll join the others in the Reptile House. Tim Skelton, curator of reptiles, has cared for turtles for over 40 years. He said: “This is a very difficult species to breed so I am thrilled with the arrival of this baby; it comes after a lot of hard work.” It's only the second time the Zoo has bred this critically endangered species, which it has kept for 12 years. The Zoo’s first Vietnamese box turtle hatched in 2012 and is doing very well, munching away on a diet of snails, worms and chopped fruit. Bristol Zoo is thought to be just the second Zoo in Europe to have ever bred the species.