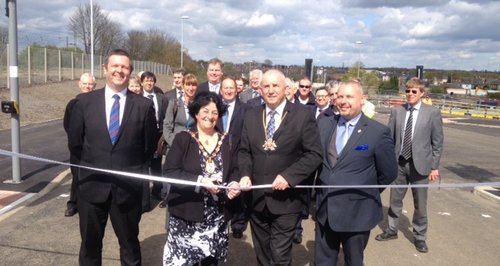 It's taken over a year to construct and Hearts been told it will bring economic and social benefits to Huntingdon.

The half kilometre stretch has been named after the company Edison Bell who had factories in the town 100 years ago making records and record players.

It's cost £10 million to build and was funded by the District Council, County Council and an interest free loan for the Local Enterprise Partnership.

Jason Ablewhite is the Leader of the District Council and says it's worth the money:

"It's a small link road that actually unlocks far more than the money that’s been spent here in terms of economic growth, economic development, the social impact for local residents who normally have to go round what has been dubbed one of the biggest roundabouts in the country"

Councillor Ablewhite also said this is just "one piece of the jigsaw puzzle" as it's part of a bigger £25 million project to redevelop the town centre. The opening of the link road is the second milestone with the first being the opening of the multi-storey car park.