A14: Labour Calls For Toll Rethink

The Shadow Transport Secretary has called on the government to show proof that drivers would not block up local roads by avoiding tolls on the A14.

Maria Eagle's remarks come as the public consultation into the A14 upgrade, including proposed tolls between Swavesey and Ellington, continue.

Road tolls are planned for the stretch of the A14 to help pay for the £1.5 billion upgrade of the route.

Tolls of £1 or £1.50 for cars, double for heavy goods vehicles, are proposed as part of the project.

Fees would be collected by number plate recognition rather than toll booths.

Under the scheme, the A14 will be widened between Swavesey and Milton to three or four lanes in each direction. 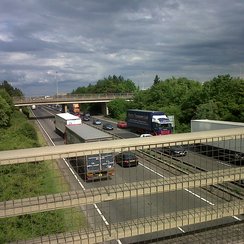 The junction around Girton would also be upgraded to improve the flow of traffic.

There would also be extra roads for local traffic between Girton and Fen Drayton, and a new Huntingdon bypass.

The government hopes the upgrade will put a stop to the congestion and crashes that have become commonplace on the A14.

However the Shadow Transport Secretary believes there is a danger that drivers will simply avoid tolls on the A14 by using surrounding local roads instead: "Traffic just gets driven off the road where the toll is onto other roads.

That can have a really serious impact.

It tends to be on roads that are unsuitable, for example through villages, which get more congested because of the toll.

I think the government needs to set out in much more convincing detail the proposal to show that that isn't going to happen.

If they haven't done that, if we win the next general election, I'd be happy to look again at whether what they are proposing will actually work."

The MP has pointed to the example of the last toll road to be built in this country, the M6, as an indication the scheme may not work as expected: "It's never made any money, and we've had a load of displacement of traffic onto the normal M6 where you don't have to pay, and other local roads.

Consequently it hasn't worked in the way it was intended to work."

The public consultation into the A14 upgrade closes on the 13th October.