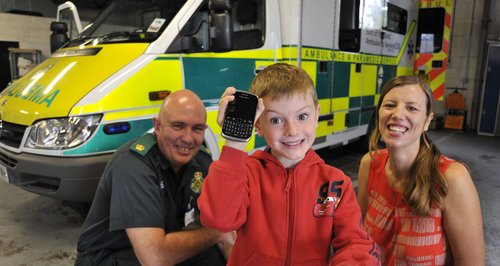 The East of England Ambulance Service is praising a five year old boy from Cambridgeshire, after remaining calm and dialling 999 when his mum fell ill.

Joanne Oldham, from Buckden near St Neots, collapsed unconscious and suffered a seizure at her home in Buckden on the evening of June 3 with only her children in the house.

Five year old Harry remembered what his mum had told him to do in an emergency and immediately called 999.

The Ambulance Service said he showed 'a calmness that would escape many adults in a similar situation'.

He called 999, getting through to Call Handler, Caroline Clarke, telling her that his mum was very unwell and that he needed an ambulance.

With a bit of encouragement and patience from Caroline, Harry gave his address and followed instructions to check that his mum was breathing.

Caroline remained with Harry on the line while the ambulance travelled to the house, keeping him calm and telling him how well he was doing.

She also asked him questions about his mum?s condition and ensured he continued to check her breathing.

When the ambulance arrived, Harry then managed to work out how to unlock the door so that the crew could enter the house to assess and treat Joanne before taking her to hospital.

Thankfully, Joanne made a full recovery and is now back home and full of praise for her youngest son: "I'm really proud of Harry.

I had told him before about how to call 999, but I'm surprised he remembered; he usually can't remember what he did yesterday!

I was a little bit upset that he had to see me lying on the floor but the ambulance services were amazing with him and he was very proud of himself.

It's scary to think what could have happened if Harry had not known to dial 999 as his older brother is disabled so couldn't help, and there were no other adults in the house.

I'd encourage all parents to teach their children how to call 999 as you really do never know when there might be an emergency."

Harry and his mum have recently been to visit their local Ambulance Station in Huntingdon, where Harry was presented with a certificate for his bravery.

Clive Goodson, Assistant General Manager at Huntingdon Ambulance Station, said: "What's amazing about Harry is that because his mum doesn't have a medical condition he had not been coached in what to do as he would if mum was diabetic, for instance.

It makes it even more impressive.

Harry also got chance to look round an ambulance and tried out the seat.

He said: "They wouldn't let me drive the ambulance but when I'm older I'd like to drive one so that I can help people.

I remembered what mummy told me about how to call 999 and I wasn't scared at all."

Find out what to do in an emergency and how to call 999 here.