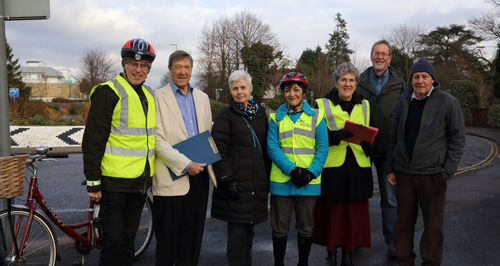 Residents campaigning to make Cambridge's Fendon Road roundabout safer have called on the County Council to act, after discovering that up to 1,800 vehicles use the junction every hour at peak times.

That equates to one vehicle passing through every two seconds at rush hour.

Their survey also indicates up to 225 cyclists also travel through the roundabout every hour and 20% ride on the narrow and uneven pavements.

The roundabout has one of the highest reported accident rates in Cambridge with 34 crashes in a five year period.

Councillor Taylor said: "This is an extremely busy junction which is used by vehicles, cyclists and pedestrians.

I am worried that it is only a matter of time before someone is seriously hurt or even killed.

I have handed our survey findings to the county council asking officers to come up with safety measures."

Doctor Tim Moore of Queen Edith's Way, who organised the survey, says "This is a dangerous roundabout because of the volume of traffic and the road layout."

The main survey findings were:

A Cambridgeshire County Council spokesman, said: "The Council is committed to improving the highway network and safety for all road users throughout Cambridgeshire from within the financial resources that are available to us and we will look at the findings of the survey with interest.

Other local authorities, action groups or communities are also able to make a contribution to meeting the cost of any highway changes or improvements they want to see carried out at locations in their area via the Local Highways Improvement Scheme."