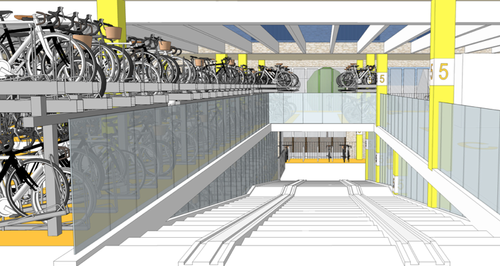 Plans to build the biggest cycle park in the UK in Cambridge have been approved.

The multi-storey building, which have enough room for around 3,000 bicycles, will be built near Cambridge Train Station.

The plans also include an adjoining 231 room hotel.

The proposals are part of multi-million pound plans to redevelop the area around the Railway Station in Cambridge.

There will also be new retail and restaurant units.

The plans were approved by Councillors at Cambridge City Council yesterday (Wednesday).

Sven Töpel, Chief Executive of developers Brookgate, said: "Receiving planning permission for the cycle park and hotel is great news and a takes us a step closer to the delivery a new Station Square and the major improvements to the transport interchange.

The proposals have been very well received by the local cycling community and will deliver significant public benefits of CB1, supporting our vision of creating an exciting city centre quarter for Cambridge.

The site is part of the CB1 masterplan which will provide around 1.4 million sq ft of new and refurbished homes, offices, shops and student accommodation built around a radically improved public transport interchange at the heart of the city and new public spaces."