Actor Pierce Brosnan has been spotted dining at Midsummer House in Cambridge.

There are reports the former James Bond star is shooting a new movie in the city.

Midsummer House Chef Daniel Clifford tweeted: "Got 007 in for dinner but which one is it"

He then later posted: "It was pierce brosnan what a cool guy" 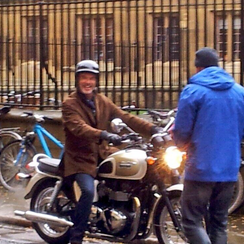 We may have had a few questions about him being here, but we tried to be as discrete as possible."

Brosnan is then reported to be at Clare College filming scenes for new film 'How To Make Love Like An Englishman'.

A porter from Clare College has confirmed that some filming has been taking place there, but would not comment further.