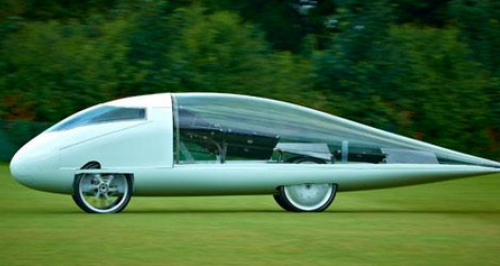 Students from Cambridge University have developed a solar-powered racing car that can reach almost 90 miles an hour, using the same power as a hair-dryer.

The Cambridge University Eco-Racing Team hope a technological breakthrough will help the car beat competitors from around the world at a 1,800 mile race in Australia later this year.

They have invented unique movable solar panels which track the position of the sun, meaning they are always in the optimum position to soak up the rays.

The panels are encased in the teardrop-shaped body shell, which is so light and aerodynamic it can reach a top speed of 87mph despite having the same power output as a hairdryer.

It also has the motor located in the hub of the wheel, eliminating the need for gears, chains or differentials which would lower its efficiency.

Its sleek, tapered design means only short drivers can take the wheel, with a maximum height of 5' 3".

The prototype, which has been named 'Resolution', was given its first outing at a road test on Friday (July 5) at the Millbrook Race Track, near Bedford.

Students hope the car will help them become the first Brits to win the 3,000km (1,860 mile) World Solar Challenge race between Darwin and Adelaide in October.

Team manager Keno Mario-Ghae, an engineering student at Girton College, said: "Traditionally, the entire structure of a solar car has been based on a trade-off between aerodynamic performance and solar performance.

That's how they've been designed for the past 10 years, and that's why they all tend to look the same.

We turned the concept on its head. Our reasoning is that solar performance needs to adapt to the movement of the sun, but the car needs a fixed shape to be at its most aerodynamic.

To make the car as fast and powerful as possible, we needed to find a way to separate the two ideas out, rather than find a compromise between them.

Efficiency is where our real strength lies and this is how we will be hoping to compete with the bigger teams entering the Challenge this time around.

A huge amount of careful planning has gone into this project.

It has involved research not just in terms of engineering and aerodynamics, but into the materials we use, the modelling behind the design, and the optimisation of the solar cells that power the car."