Police in Cambridge are warning people not to swim in the lakes in Cherry Hinton during the hot weather.

Cambridgeshire Police say people have been breaking in and swimming in the lakes, despite the fact they are on private land.

Extra officers are being sent to patrol the area, working with Cambridge City Council and the landowner as well as speaking to those who are trying to access the lakes.

Inspector Steve Poppitt said: "We have a problem with people swimming at the old chalk pits and making a nuisance by leaving litter, parking inconsiderately and risking their safety by swiming after drinking alcohol.

The site is private property and these people are not only trespassing but are also risking their lives.

People swimming in the water do not know what dangers lie beneath the surface.

Please don't risk your safety for the sake of cooling off on a hot day as it's simply not worth it."

The warning comes after a 16-year-old boy, who was living in Ely, died at Bawsey Pits, a series of flood quarries, in Norfolk last night, (Tuesday). 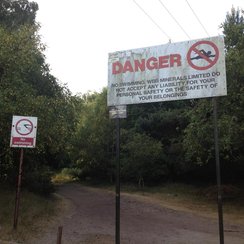 The body of a 41-year-old man from King's Lynn was also recovered, from a separate lake in Bawsey Pits.

Despite the tragedies and dozens of signs warning of the dangers, members of the public could be seen swimming at Bawsey Pits on Wednesday afternoon.

I think people will carry on as normal.''

Police said that people had attempted to swim in the lake even as Tuesday's rescue attempt was under way.

Norfolk Police Assistant Chief Constable Nick Dean said: "People must heed the warning - you don't know what you're going into, you don't know the currents or what underwater obstacles there are.

People were entering the water as we were attempting the recovery so that shows how, on occasions, people ignore the warnings.''

The man had told his girlfriend he planned to swim about 50 yards out in one of the flooded quarries towards an island.

He was near the shore of the island when he disappeared below the surface.

At the same time, police were told of the missing teenager at another lake about half a mile away. After searches were launched at 4.30pm, the body of the man was found at 7.24pm and the teenager at 9.25pm.

Both were found entangled in reeds about 6ft below the surface, according to Norfolk's chief fire officer.

Hundreds of sunbathers looked on as the search took place and Mr Williams said officers had to prevent members of the public entering the water.

ACC Dean added: "It was an extremely hot day and clearly the temptation to enter the water, despite many warning signs, was too much for some. When we arrived there were people still swimming in the water, oblivious to what was going on.

Swimming is banned here and the signs are there for everybody to see.

This just highlights the dangers of swimming here or in any other unsupervised area of open water.

We don't know if they were dragged under by some obstacle or other but they were certainly held below the surface by reeds.

It is difficult to say how long they could have survived, but we were battling against time and they would only have survived for minutes.''

A spokesman for Sibelco, which runs the disused quarry, said the firm was deeply saddened by the deaths.

He added: "Safety is our prime concern and signs are in place to warn against swimming and diving.

We will work with the police and other investigating authorities to help establish exactly what took place.

Until that process has run its course, we can only say further that our thoughts go out to all who have been touched by these deaths.''