The MP for North East Cambridgeshire's found out The Department of Health tried to stop details of poor standards of care and high death rates at an Essex Hospital being published.

The Department of Health under Labour tried to stop details emerging of a hospital scandal involving higher-than-normal death rates, emails have revealed.

Former health secretary Andy Burnham was ``furious'' when news leaked of poor standards of care at Basildon and Thurrock University Hospitals NHS Foundation Trust in November 2009, a few months before the general election.

The Department of Health (DoH) ordered the Care Quality Commission (CQC) not to brief the press on an inspectors' report into the trust, which found appalling standards of hygiene, the emails said.

But by then the CQC had already told three national newspapers the report was impending and the story was being published by the Press Association.

The emails - released by the CQC under the Freedom of Information Act following a request by Tory MP Steve Barclay - reveal how the regulator had concerns about Basildon since May 2009 but then rated the trust as ``good'' in the October. 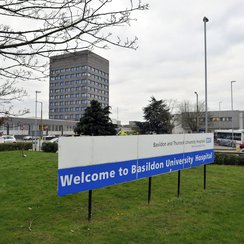 The CQC ``arguably sat on a highly sensitive safety issue for six months before informing patients and the public'', according to the emails from senior CQC staff to DoH officials. They added: ``Defending material which is not defensible is always a bad place to be.''

The emails stated how, as the CQC prepared to tell the press of its findings into Basildon, senior officials at the DoH emailed the regulator and ``asked it to stop the press release''.

The CQC told them it was ``too late'' and agreed to halt any further press activity. But by then the Press Association had got hold of the story and published it with ``more graphic detail than our own release''.

The situation led to Mr Burnham, who is now shadow health secretary, being ``furious'' with the CQC.

The CQC admitted in the emails it ``did not take the time to consider the consequences of this story running''.

It added: ``Although we had followed set procedures for informing the Department of Health, we had not ensured that the political implications were understood by ministers.''

The emails, published by the Daily Mail, make reference to one other health and social care report, saying it should be presented in a ``positive'' light given the political climate at the time.

An email sent round by a senior CQC boss says the DoH ``will go through this report with a toothcomb and it is naive to think that they will only really do a factual check''.

Health Secretary Jeremy Hunt told the Daily Mail: ``There is now a strong body of evidence that Labour ministers leant on the hospital watchdog to cover up poor care, leaving hundreds of patients to suffer under a system that put political priorities first.

``The care of NHS patients is too important for political meddling.''

``The longer he stays in post the more discredited his party's position is on the NHS.

``He is furious when bad news comes out and his officials are saying whatever you do don't put anything bad in the press.

``I think his reputation is seriously damaged.

``This limited sample of emails shines the light on a culture where he and his officials are putting pressure on the regulator to water-down its concerns.''

A Labour spokesman said: ``This is the latest stage of an on-going Conservative Party smear campaign against the last Labour government.

``These old, unfounded allegations have already been answered in full. No evidence has ever been produced to suggest anything other than that ministers acted properly at all times.

``The facts show that ministers did the precise opposite of what is alleged.

``When problems at Basildon and Thurrock hospital first emerged, Andy Burnham made a full statement to Parliament and ordered an in-depth investigation of every hospital in England to be completed before the General Election.

``Action was also taken to improve the internal running of the CQC.

``On Basildon, a CQC press officer briefed the media without authorisation and before the Department of Health was officially notified.

``This was a breach of established practice and left the Department unable to respond properly to the many enquiries it was receiving from public and press following reports on rolling news programmes.''

Shadow health secretary Andy Burnham has denied ordering a ``cover-up'' of hospital failings and accused Jeremy Hunt of launching a ``smear campaign without evidence'' against him.

Mr Hunt, who now holds the post in the coalition Government, seized on the emails as ``shocking revelations on Andy Burnham's attempts to cover up failing hospitals''.

``We're legislating to make sure this can never happen again,'' he wrote on Twitter.

But Mr Burnham insisted they showed only that he was concerned that disclosure rules had been broken and challenged Mr Hunt to substantiate his claims or apologise.

``It is impossible to see how you can claim this mounted to a cover-up,'' he told him in a letter.

``I therefore ask you, by the end of Friday, to provide me with evidence to substantiate your assertion.

``If you fail to provide such evidence, I will require a full retraction and public apology. If that is not forthcoming I will consider further action.''

Inspectors found blood stains on floors and curtains, blood splattered on trays used to carry equipment and badly soiled mattresses in the A&E department with stains soaked through.

They also found equipment being used repeatedly that should only be used once and resuscitation room equipment that was past its use-by date.

Basildon and Thurrock was rated as ''good'' on quality of service in the CQC assessment published in October 2009 and ''excellent'' for its financial management.

The CQC gave the trust 13 out of 14 for cleanliness, seven out of eight for standards of care and five out of five for keeping the public healthy.