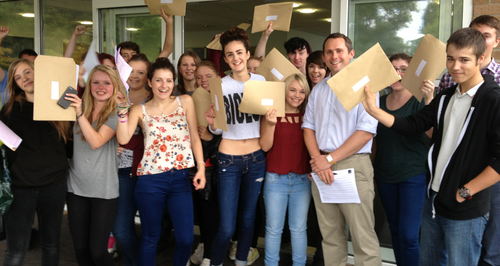 Students from across Cambridgeshire and Peterborough were among the 600,000 teenagers nationally collecting GCSE results today.

The proportion of GCSEs awarded at least a C grade has fallen for the second year running, official figures have revealed.

The proportion of entries gaining top grades has also fallen by 0.5 percentage points - with 6.8% achieving a coveted A*.

Girls continued to out-perform boys, scoring higher results at A* and A*-C across all subjects.

The dip in national results comes amid major upheaval in the exams system and it is thought that a rise in pupils entering maths GCSE early or multiple times, changes to science GCSEs and an increase in pupils taking international GCSEs (IGCSE) in certain subjects have contributed to the falls in performance. 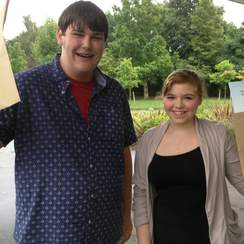 Top-class students at Wisbech Grammar School have notched up a raft of high grades in the GCSE examinations.

Half of the passes were at the A* and A Level, with particularly strong performances in maths and science subjects, and 17 pupils achieved nine or more A* and A grades. 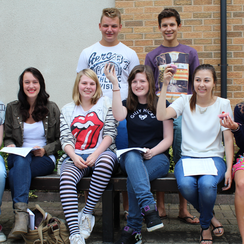 Headmaster Nicholas Hammond said:  "This is an excellent performance by Wisbech Grammar School pupils, who have been ably assisted by their teachers.

Whilst we are delighted with the performance of the 17 high achievers, congratulations are also due to the many students who secured their personal targets.

As well as performing with distinction in the exam hall, this group of young people has also achieved much in other areas of school life.

We look forward to them continuing their education with similar success in the future.”

The 145 boys and girls that made up The Perse's first co-educational Year 11 broke the School?s GCSE records with 90% of entries being graded at either A* or A.

Three quarters of students achieved 9 or more A* and A grades.

All 88 GCSEs taken a year early by Year 10 pupils were graded A*.

Head Ed Elliott commented: ''These are exceptional results achieved by our first ever co-ed Year 11.

They are the product of much hard work and dedicated study and I congratulate all the boys and girls on their achievements.

I also thank the staff for their inspirational teaching and commitment to helping students realise their individual potentials.

I congratulate our Year 10s for their clean sweep of A*s, which is an outstanding achievement.''

Students at St John Fisher are celebrating the best ever results at the school.

The headline measure of percentage passing five or more subjects, including English and Maths, at grade C or above is 47%, a significant increase on the 2012 figure of 34%.

This is the fifth consecutive year that the school has exceeded its targets 69% achieved five or more passes at grade C or above, a massive improvement on the 2012 figure of 46%.

The percentages making expected progress in English and Maths are 67 and 64 respectively.

The Maths figure is a huge improvement on the previous year?s 42%.

Headteacher Sean Hayes said: ''We are absolutely delighted with these excellent results, which reflect the hard work of the students and their teachers.

After the dip in results last year, which had been expected, these results show that we are back on track with our year-on-year improvement, and our students are now getting the results that they should.

We work with each individual student to ensure that they achieve the best possible grades in the subjects that are appropriate for them.''

Indicative results show that 95 per cent of pupils at the Stanground Academy have gained five or more GCSE passes (A*- C).

What is more impressive is that 62 per cent of pupils have gained five or more GCSE passes (A* - C) including English and mathematics which is a much harder target to meet.

This represents a dramatic 23 per cent increase from the 39 per cent pass rate achieved in 2012.

Ged Rae, Principal, said: ''This transformational set of results reflects the progress Stanground has made since becoming an Academy sponsored by the GDFT.

Basic standards, behaviour and attitudes to learning have improved significantly ensuring students now have a learning environment conducive to success.

This will be further enhanced when we move into our fantastic new building in September.

The remarkable improvement in student performance reflects the enthusiasm, hard work, determination and commitment of both our students and staff. I am delighted that our students have achieved the results they deserve.

This success provides a platform for further improvement as we strive to become the outstanding school our community deserves.''

Councillor John Holdich, Deputy Leader and Cabinet Member for Education, Skills and University, said: "It has no doubt been a tense few weeks for the thousands of young people across Peterborough who have taken GCSE exams or the equivalent, eagerly waiting to see how they have performed.

Our students will have worked extremely hard and they should be very proud of their achievements.

Congratulations should also go to teachers and other school staff who have supported these young people to get the best grades possible.

We have invested heavily in our schools in the past five years, particularly at secondary level, which has included a rebuild or refurbishment of every secondary school in Peterborough.

This has ensured that every young person is able to learn in modern facilities, regardless of where they live in the city.

Alongside this we are also working closely with all our schools to ensure that our young people are getting a good education and are being supported and encouraged to reach their full potential."

Despite a warning from the government that schools should expect Science results to dip, students at King?s Ely have bucked national trends by improving on last year's results.

A total of 78% of Chemistry students scored an A* or A as did 75% of Physics students and 63% of Biology students.

Record numbers of Peterborough pupils have achieved five or more A* to C grades at GCSE including maths and English.

The number of pupils achieving five or more A* to C grades in any subject has also reached a record level, and at three Peterborough secondary schools every pupil achieved five or more passes at grades A* to G.

Jonathan Lewis, Assistant Director in Children's Services with responsibility for education and resources, said: "We have a clear vision to provide a first class secondary education for all young people in Peterborough. We continue to invest heavily in secondary school education and we are committed to ensuring all our students have an excellent environment in which to learn.