A courageous cat from Ely has been named as a finalist in a national competition to find the nation's most incredible pet survival story.

Five-year-old Malteaser was nominated for the competition by her owner, Amanda Kayes, after she went missing for five weeks in February this year.

Malteaser was eventually found starved and freezing to death in a compost heap, where it is thought she crawled to try and keep warm.

She was coaxed back to life by intensive vet nursing and the love of her devoted owner. 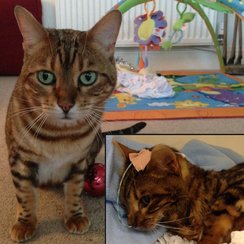 Amanda says, "I put up fliers and called the all local vets.

"It was so cold and the temperatures were dropping rapidly. Some nights it reached -12C and I was beginning to think that we would never see Malteaser again.

When she was found and returned to her owner, thanks to a microchip Amanda recalls, "I was so relieved, I rushed to see her and she made a few squeaks when she recognised me. She was really unwell though, had lost half her bodyweight, lost several teeth and had heavily frostbitten ears and paws. I was warned she may not survive."

"She weighed under two kilos and could not eat at all. She was just lying there. During the two weeks she was with us she needed intensive care and was extremely malnourished. What saved her was the daily visits from Amanda, who was weeks away from having her first child and had to sit on the floor with the cat."

Malteaser still needed lots of help when she was allowed home as she had to learn to walk properly again. Now fully recovered, she is enjoying every minute she spends with Amanda and the new baby. Ian says, "In our opinion, this cat was loved back to life."

Malteaser is up against five other pets who are in the running for the title of PDSA Pet Survivor of 2013.

Members of the public have one week (8th to 15th December) to vote by text for their favourite pet survival story, click here for more details.