Specialist teams are examining the site of a helicopter crash involving a US military aircraft from RAF Lakenheath, described as the size of a football pitch.

The investigation into Tuesday night's Pave Hawk crash on the north Norfolk coast is being hampered by the fact that it was carrying munitions, meaning that bullets are scattered around the scene.

Emergency services worked throughout the night with the help of military personnel and volunteers after the aircraft from RAF Lakenheath came down at a nature reserve in Cley next the Sea at around 6pm during a low-flying training exercise. 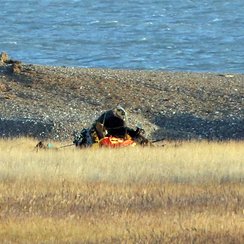 Speaking near the scene, Chief Superintendent Bob Scully of Norfolk Police said: "We have currently cordoned off about 400 square metres of the marshland area.

The crash site itself I would describe as an area of debris on difficult terrain on the marsh that's about the size of a football pitch.

It's not on the beach, although there are some bits of debris which are vulnerable to high tide.''

Mr Scully said it was too early to say what caused the crash.

"At the present time the coroner, who is responsible for the investigation into the deaths, is carrying out a daylight assessment of the situation and is then arranging for the deceased to be removed from the site,'' he said.

He said the investigation would then be passed over to the Air Accidents Investigation Branch and its counterparts in the US.

That ammunition is not of any great significance.

It is bullets, if you will, but those are scattered about that area that I just described to you, and so the site is hazardous to members of the public and those people that would normally visit this area for birdwatching and other nature-interest activities, so for the present time we will be assisting and working with the military to ensure public safety by restricting access to that area.'' 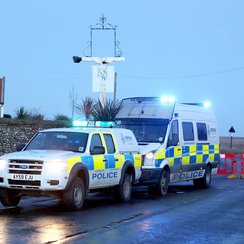 A second helicopter from RAF Lakenheath was also in the area at the time of the crash and set down on the marshes to try to assist.

Mr Scully refused to speculate on whether the second helicopter had any involvement in the incident but said that, as it was nearby at the time, it made sense that it went to help.

He went on: "We are moving from a potential recovery operation to one of preserving the scene and carrying out an investigation.

As you would expect, we in the UK police have expressed our condolences to our US colleagues for the loss of some of their crew.

It's a desperately sad time. The US authorities have been responsible for notifying the next of kin of those who have sadly died.''

Residents told of hearing a ``heavy and very unusual'' sound overhead as the helicopter - which specialises in recovering troops from war zones - plummeted into marshland at the Norfolk Wildlife Trust Cley Marshes Nature Reserve.

Inquiries into the cause of the crash, as well as the recovery of the wreckage and the second aircraft, are expected to take a number of days to complete, due to the geography and the munitions from the crashed helicopter.

A police spokesman said that an environmental assessment will also take place.

A 400m cordon protects the crash site, and the A149 through Cley remains closed. 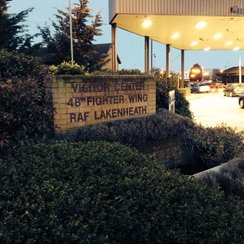 Details of the four crew members will not be released until next of kin have been informed and it is not believed that anyone in the surrounding area has been injured, police said.

Peter and Sue McKnespiey, who run Cookies crab shop in Salthouse, live near the crash site.

I don't know about engines but I am used to the sound of helicopters and this sounded very heavy and very unusual.

My gut instinct was there was something wrong.

I keep hoping the helicopter I heard isn't the one that crashed.

I think the whole village will be devastated when it realises what's happened.''

The HH-60G Pave Hawk helicopter was on a training mission from RAF Lakenheath - a base for the US Air Force - which lies on the Suffolk Norfolk border, around 50 miles from the crash site.

The 48th Air Wing of the US Air Force tweeted: "We can confirm that one of our HH-60G Pave Hawk helicopters was involved in an incident during a training mission outside Cley-next-the-Sea.'' 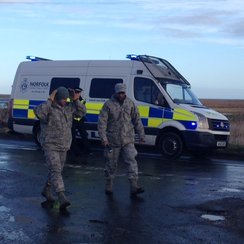 A statement from the 48th Fighter Wing of RAF Lakenheath later added: "US military officials are coordinating the recovery efforts with the UK police and the Ministry of Defence.

The authorities have secured the crash site and established a cordon.

The aircraft, assigned to the 48th Fighter Wing, was performing a low-level training mission along the coast when the crash occurred.''

A derivative of the more famous Black Hawk helicopter, the Pave Hawk gets its name from the PAVE acronym standing for Precision Avionics Vectoring Equipment.

They are used for combat search and rescue, mainly to recover downed aircrew or other isolated personnel in theatres of war.

They have a four-man crew and can carry up to 12 troops.

Typically, training flights would replicate as closely as possible real missions which would mean weapons and ammunition would be carried.

Richard Kelham, chairman of Cley Parish Council, said: "It looks as though the military helicopter has come down in the middle of the bird reserve.

The incident is very sad.''

A resident who did not want to be named said: "We heard the helicopter fly over.

There wasn't any bang but soon after we heard some jets fly over very low.

It was obvious it was part of a search operation and it shook our house.''

Norfolk Wildlife Trust said on their website they were "shocked'' to hear of the crash.

A statement said the aircraft came down "on the shingle bank at NWT Cley Marshes nature reserve, and our immediate thoughts are for the families of those who sadly lost their lives.''

"I heard the helicopter flying overhead and watched from my back garden,'' he said.

"It was very quickly obvious something serious was wrong.

The search and rescue crews quickly arrived and it was my job to escort them over the marsh.

The conditions are very difficult because the marsh has flooded twice in recent weeks so that's hampering their efforts to recover the bodies and make the helicopter safe.

There's only one track in and out of the crash site, which is also restricting their movements.

I've never known anything like and never seen so many people here at one time.''

Norfolk Constabulary Assistant Chief Constable Sarah Hamlin said: "I would like to pass on my condolences to the family, friends and colleagues of those US Air Force personnel who have sadly lost their lives in this tragic incident.

Emergency services, the military, partner agencies and volunteers have been working through the night to deal with this difficult situation on our coastline and I would also like to thank them for their professionalism and resilience.

As our inquiry moves on today and the recovery of the aircraft begins, I would urge the public to stay away from the area - the cordon and road closures are in place to allow our experts to carry out these processes safely and there is no risk to members of the public if this section of marshland is avoided."